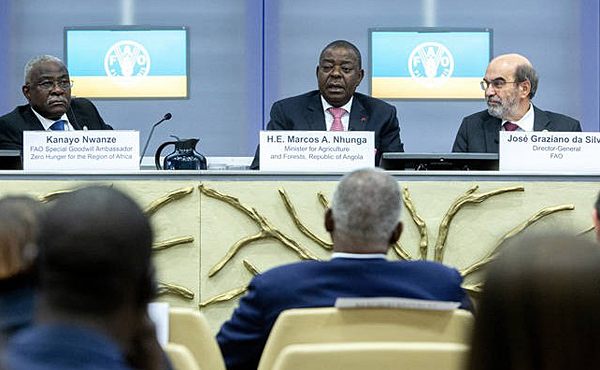 ROME — Stepped up and concerted actions are needed in Africa if the Sustainable Development Goal of Zero Hunger and the more ambitious Malabo hunger target are to be met, Member Countries were told during an event on the sidelines of the 41st Session of the FAO Conference.

The Malabo Declaration, adopted by African Union member states in 2014, calls for the intensification of collective efforts towards the eradication of hunger and malnutrition by 2025. The Sustainable Development Goals, adopted globally in 2015, aims to end hunger, achieve food security and improved nutrition, and promote sustainable agriculture by 2030.

Evidence shows the African continent is not on track to meet these commitments.

The FAO Director-General José Graziano da Silva emphasized the urgency required. “I am here to say yes we can, we can do it. I have experience in my country (Brazil). We eradicated hunger in less than 10 years. So if there is political will and commitment, we can do it,” he said.

“We do not have options other than accelerated and concerted actions,” he said. “And strong champions who can speak truth to power are absolutely necessary to drive the Zero Hunger agenda.”

The side-event, “Progress towards meeting the Malabo Goal of Hunger Eradication by 2025: prospects and challenges in the Africa Region,” saw countries share their experiences on accelerating progress towards eliminating hunger and malnutrition in Africa.

“The greatest challenge we have is in the policy dimension: consistent policies and investment in the agriculture sector particularly for rural populations,” Kanayo Nwanze, FAO’s Special Goodwill Ambassador for Zero Hunger in Africa said.

Angola’s Minister of Agriculture and Forests, Marcos A. Nhunga explained how Angola has focused on human resources, logistics and markets to boost agriculture, with a focus on family farmers, in order to improve food security. He said prices for inputs such as seeds and fertilizer have come down, while technical assistance such as family farmer field schools has increased. He also said private sector collaborations have been set up to improve infrastructure, and a credit system has been established to help farmers access new technologies.

Niger’s Minister of Agriculture and Livestock Mohamed Boucha outlined the country’s ‘Nigeriens Nourish Nigeriens’ agriculture initiative and said he is optimistic for the country to achieve the Zero Hunger goal. He said his country has cut poverty, reduced food insecurity, increased irrigation, improved seeds and increased access to markets and training for farmers.

FAO’s work in Africa aims to complement and add value to regional and country efforts towards achieving the Malabo Declaration targets and the Sustainable Development Goals, through capacity strengthening, policy and strategy support, multi-stakeholder engagement and coordination.

FDA improving the safety of seeds for sprouting

USDA to invest more than $4B to strengthen food system
June 8, 2021

How welcoming are farmers markets?
June 8, 2021