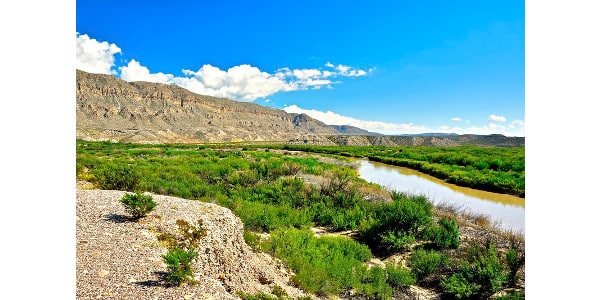 One of the longest rivers in North America, the Rio Grande delivers drinking water and irrigation supplies to millions of people from southern Colorado into Texas and Mexico under a decades-old water-sharing agreement. (Tom Driggers via Flickr)

RIO RANCHO, N.M. (AP) — The mighty Rio Grande is looking less mighty as U.S. forecasters predict spring flows will be less than half of average — or worse — and that signals potential trouble for the already stressed waterway.

One of the longest rivers in North America, the Rio Grande delivers drinking water and irrigation supplies to millions of people from southern Colorado into Texas and Mexico under a decades-old water-sharing agreement. With more dry years than wet ones over the last two decades, how much water ends up flowing downstream has been a point of contention among the states.

As New Mexico and Texas battle over their shares before the U.S. Supreme Court, forecasters with the federal government’s Natural Resources Conservation Service say river and stream flows across New Mexico have dropped noticeably following a somewhat dry March.

The models show drought is expected to keep its hold over the mountains along the New Mexico-Colorado border that feed the Rio Grande, while California, Nevada and other southwestern states aren’t likely to see a reprieve from dry conditions through June.

In southern New Mexico, irrigation officials are expecting flows into the state’s largest reservoir to top only 34% of the 30-year average. There’s some water in storage from 2019, but officials say that will likely be used by summer and New Mexico will be prohibited from storing any additional water to keep from violating the water-sharing compacts.

“That basically means the water supply for the Rio Grande Project, including EBID, is in pretty bad shape,” he said.

The irrigation district is home to some of the nation’s top producing pecan orchards and many farmers in the region grow chile, New Mexico’s signature crop.

Upstream, environmentalists are concerned about the river’s overall health and the implications of another dry year for minnows and other imperiled species.

Galen Hecht with WildEarth Guardians visited the Rio Grande south of the Otowi Bridge gauge on Saturday. The water in some spots wasn’t high enough to cover the boulders that make up the riverbed.

In a decade of forecasts, only twice did the Natural Resources Conservation Service estimate above average flows at Otowi. Hecht said the alarm bells are ringing again, as the latest outlook calls for flows that are about half of average.

“History shows that less than average water years and existing demands result in low flows, consolidated pollutants and river drying, which harms the environment and impacts the health of our communities,” he said.

A large reach of the Rio Grande did dry up below Albuquerque in 2018, with the drying starting as early as April. Just a year earlier, biologists marked unprecedented numbers of adult Rio Grande silvery minnows in the river due to wet conditions, but the subsequent low flows ended up decimating the population.

Federal officials said during a meeting Monday there wouldn’t be any big releases this year to augment flows for the minnows since there’s no extra water to go around.

All they can do is “jiggle” the flows in hopes of encouraging spawning so eggs can be collected for the captive breeding effort. That means the Middle Rio Grande Conservancy District, which serves farmers in central New Mexico, will hold back some water for a day and then release more a couple days later to mimic a pulse of spring runoff.

Biologists with the U.S. Fish and Wildlife Service say if the river dries during or right after the minnows spawn, that could be tough on the larvae. If flows improve, it could be an average season for the fish — but likely no better.

While neighbors in Nevada and Arizona were in shorts and T-shirts on Monday, New Mexico got a late dose of winter. Several inches of snow were reported in the higher elevations as rain fell elsewhere.

Officials say they’ll take it as federal data indicates the snowpack’s moisture content is down to about two-thirds of average and that drought is lingering in the Rio Grande Basin from the headwaters in southern Colorado south to around Albuquerque. A pocket of drought also has been centered over the Four Corners region since last year.

Colorado started diverting its share of the Rio Grande in early April, meaning little water has been coming across the state line, said David Gensler, the water operations manager for the conservancy district.

Irrigation demand often rises in April faster than the river does depending on snowpack and temperatures. He said 2020 is proving that, pointing to the low flows at the Otowi gauge.

As the nickel-sized snowflakes fell Monday, Gensler and others were thankful.

“I know we’re going to need just about every drop we can get,” he said.

Drought conditions improve in most regions across MA
November 10, 2020