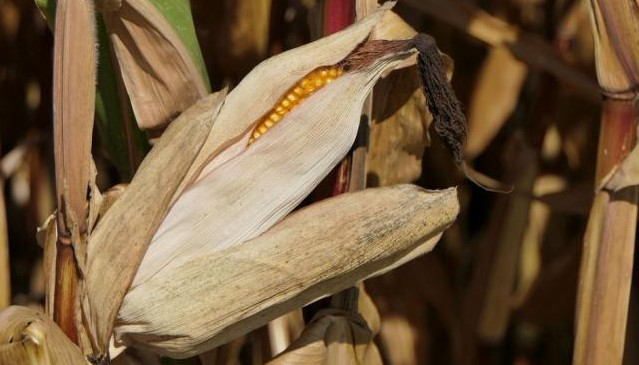 Ohio’s corn yield is forecasted to be down 34% from last year’s yield; and its soybean yield, down 31%. The projected yields on both crops are expected to be the lowest since 2008, according to the U.S. Department of Agriculture. (OSU CFAES)

COLUMBUS, Ohio — The late start to the planting season stunted growth in many corn and soybean fields across Ohio, and yields for both crops are expected to be the state’s smallest since 2008.

Last spring’s unrelenting rain caused shallow roots to develop in both soybean and corn plants because the roots did not have to reach far down into the soil for moisture, say crop experts with The Ohio State University College of Food, Agricultural, and Environmental Sciences (CFAES). Planting in wet soils also led to soil compaction in which particles of soil became pressed together, reducing space between them and limiting the flow of water.

Then summer brought little rain in much of the state, further hindering the plants’ ability to absorb water.

“The issues with corn this year, I think, are pretty widespread,” said Peter Thomison, a corn field specialist with CFAES.

Ohio’s corn yield is forecasted to be down 34% from last year’s yield; and its soybean yield, down 31%. The projected yields on both crops are expected to be the lowest since 2008, according to the U.S. Department of Agriculture.

Corn in some Ohio fields is at risk of fungal rot, which can cause stalks to break off below the ears, leading to harvest losses, Thomison said.

To reduce potential losses, corn growers should prioritize harvesting fields with stalk rot because delaying harvest increases the risk of stalks breaking off, he said.

Corn and soybean plants in southern Ohio, south of Interstate 70, suffered higher disease rates than those in northern Ohio, said Harold Watters, an agronomy field specialist with CFAES. For corn, the most common diseases this year are northern corn leaf blight and gray leaf spot; for soybeans, frogeye leaf spot, he said.

In some parts of the state, such as in portions of Union County, the lack of rain this summer will cut yields by as much as half, said Watters.

“2019 will test our bank accounts and our patience,” Watters said. “For many, this year may bring in just about half the income they had last year. That means delaying purchases, reducing personal spending, and asking the bank for more loans.”

The late start on planting corn and soybeans will mean that both crops could take longer to dry sufficiently in fields before they’re harvested, said Jason Hartschuh, an Ohio State University Extension educator in Crawford County. OSU Extension is CFAES’ statewide outreach arm.

“You’re going to see more soybeans harvested in November than normal. There will be some that are green as grass upon the first frost,” he said.

Drying crops with mechanical dryers not only adds time and expense, but the process comes with some risks, Hartschuh said. Soybeans that get too hot can shatter. Also, being high in oil content, soybeans stand a risk of igniting and starting a fire, he said. So farmers have to weigh those risks, he said.

In talking to farmers in northwest Ohio, the region hardest hit by the spring rain that delayed or prevented planting, Hartschuh tries to put this year’s crop issues in perspective.

“Remember this is one year. You always have next year to look forward to.”

For information on predicting the drying down process for corn, visit go.osu.edu/drydown.