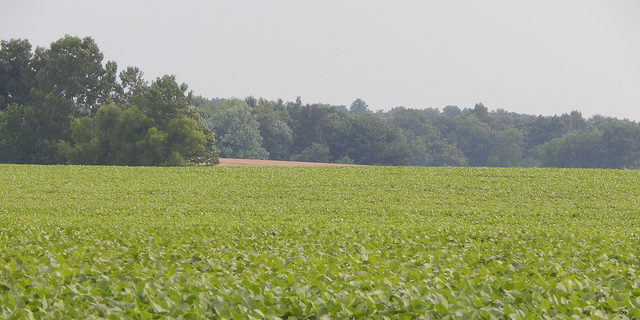 The Environmental Protection Agency (EPA) has registered Engenia, a low-volatility formulation from BASF. (United Soybean Board via Flickr)

MANKATO, Minn. — Farmers anxious to take advantage of the new dicamba-tolerant herbicide trait in soybeans and cotton now have another herbicide option. The Environmental Protection Agency (EPA) has registered Engenia, a low-volatility formulation from BASF.

Engenia is a new variation of dicamba, which has had several different formulations over a 50-year history of herbicide use in the United States. BASF’s Engenia formulation of dicamba is a N,N-bis-(3-aminopropyl) methylamine salt of a 3,6-dichloro-o-anisic acid, generally referred to as a BAPMA salt and is said to be more effective at binding dicamba spray residues, thus reducing potential volatilization of the herbicide.

In November, EPA registered the first dicamba herbicide for use with the Xtend trait technology. Monsanto’s XtendiMax with VaporGrip is a DGA-based chemistry with an added agent aimed at reducing volatility.

Engenia received a two-year conditional registration from EPA, which is contingent upon farmers using both proper drift mitigation measures and resistance management tactics.

Last season Monsanto, DuPont Pioneer and several other licensees sold soybean and cotton seeds containing the trait without a registered dicamba herbicide for postemergence use in the crop. Some farmers sprayed older dicamba formulations illegally during the growing season and drift from those applications damaged neighboring soybeans, specialty crops and other sensitive plants.

Farmers have been clamoring for dicamba herbicide approvals as seed companies had announced intentions to ramp up Xtend variety offerings in 2017. Glyphosate and PPO-resistant weeds, particularly in soybean, have growers searching for new chemical alternatives.

The Engenia label currently allows one nozzle, the Turbo TeeJet TTI11004, which delivers an extremely course to ultra-course droplet. The label also currently allows no tank mixing. However, BASF representatives said during a press conference on Thursday that additional tank-mix partners and nozzles could be forthcoming. Growers are to monitor www.engeniatankmix.com for updates.

There’s no allowed addition of ammonium sulfate and urea ammonia nitrate or the addition of any adjuvant that would decrease pH or acidify the spray solution. Such additions take away the reduced volatility advantage that comes with the new formulation, the company warned.

The label further requires a spray volume minimum of 10 gallons of spray solution per acre and spray boom height not to exceed 24 inches above the crop canopy. There is a 110-foot downwind buffer requirement.

Optimum wind speed is set between 3 and 10 miles per hour (mph). The label does allow for spraying below 3 mph if steps have been taken to confirm a temperature inversion is not present. Engenia should not be applied between 10 and 15 mph when wind is blowing toward sensitive crops, according to the new supplemental label.

Engenia should not be sprayed if rain is expected within four hours (compared to 24 hour for XtendiMax) and has a lower use rate since the BAPMA formulation is more concentrated — Engenia contains 48.38 percent dicamba (5 pounds acid equivalent per gallon). The Engenia label calls for a maximum preplant, preemergence and postemergence rate of 12.8 fluid ounces per acre (0.5 lb. dicamba ae/acre) per application.

Gary Schmitz, a BASF technical service regional manager, told DTN that company tests indicate the BAPMA formulation offers a 70 percent reduction in volatility compared to DGA (Clarity) formulations. However, he is quick to point out that volatility, while important, plays only a small role in most dicamba drift incidents.

“I’d estimate 1 percent of the problems we see are related to volatility,” Schmitz said. “Even going back to the early days of my career with Banvel [the most volatile of the dicamba formulations], particle drift is the main reason for movement onto sensitive plants.”

He said fine droplets and high winds are the most common cause of dicamba drift issues. “Nozzle manufacturers have greatly improved the designs that reduce drift, but it’s still imperative that growers take measures necessary to follow label directions. We have to focus on how to spray this right and when to spray it,” Schmitz added.

BASF has been conducting schools for retailers and farmers on how to spray the new Engenia formulation since 2012. The company has said it will continue the On-Target Application Academy efforts in 2017 and include an on-line training module.

Growers are also encouraged to monitor their state regulatory agencies as some states are considering more stringent or slightly different regulations with regard to over-the-top dicamba usage in Xtend soybean and cotton crops.

For more information on Engenia, On-Target Spray Application Academy and to find a link to EPA labels, click here.