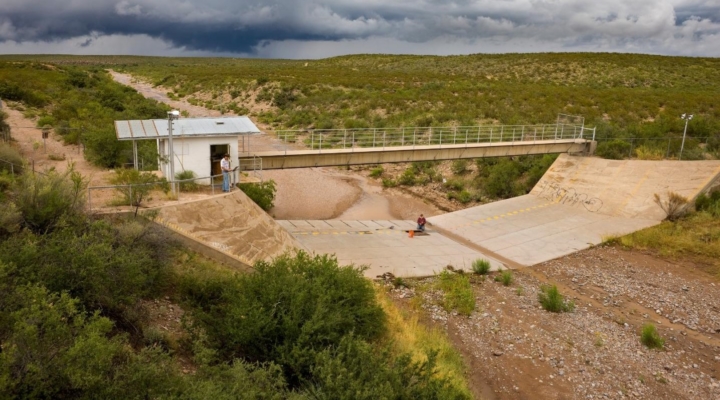 Individual, isolated monsoon rainstorms have gotten more intense and are happening more often in the Southwest US, according to an ARS study. (ARS-USDA)

Monsoon rains–highly localized bursts of rain–have become stronger since the 1970s, meaning the same amount of rain falls in a shorter amount of time–by 6 to 11 percent. In addition, the number of rainfall events per year increased on average 15 percent during the 1961-2017 period.

Monsoon rain events are usually the result of strong convection or upwelling air currents due to the difference in temperature between the earth’s hot surface and the cooler atmosphere. It is characterized by intense downpours that fall in less than 1 hour.

“We attribute these monsoon rain increases to climate change in the southwest, which the General Circulation Models (GCMs) predicted would happen if the atmosphere gets warmer. What is unique about our study is that we have validated the GCM simulations with observed rainfall data,” explained hydrologist/meteorologist Eleonora M. C. Demaria with the ARS Southwest Watershed Research Center in Tucson, Arizona, who co-led the study.

Temperatures in the Southwest have increased by 0.4 degrees F (0.22 degrees Celsius) on average per decade, which is likely a result of global climate change.

While the storms were, on average, each more intense, they do not appear to be larger or cover more territory during each one.

“It is crucial that we track changes in individual rain storm intensities, especially in regions like the Southwest, where high-intensity, short duration storms are responsible for the majority of the annual rain fall. Such changes can have important impacts on the ecology and are more likely to cause problems such as flash floods,” Demaria added. “These results also mean rangeland producers will also need more robust soil conservation plans to protect soils from erosion.”

For transportation departments and developers, designs of bridges, culverts, and overall storm water drainage infrastructure must also be more robust, and more expensive, to handle the more intense rains.”

This study is the first time the intensity of individual, very localized monsoon rain storms has been able to be measured in the Southwest. Before now, analyses of the impact of a warmer atmosphere on monsoon rainfall intensities were contradictory. Some studies reported increases in rainfall intensities over time and others found decreases. These discrepancies hail from an inadequate number of rain gauges being used in the analysis that were too far apart to capture the variability of monsoon storms, or climate models with grid cells that were too large to represent intense, but isolated thunderstorms.

While as many as 90 percent of the individual rain gauges, which are now as close as 2,100 feet (640 m) apart, showed an increase in rainfall intensity, there were still some rain gauges that showed either a decrease or no change in intensity, which reflects the wide variability in where and how monsoon rains fall.

“But the Walnut Gulch Experimental Watershed rain gauge network in the southwest, now part of the nationwide Long Term Agro-ecosystems Research network, developed by ARS in the 1950s, made the precision measurements possible to give us a definitive answer. It was designed to be as spatially uniform as possible to be able to capture summer storms that are short-lived and localized to a small area,” said ARS research hydraulic engineer David Goodrich, co-leader of the study.