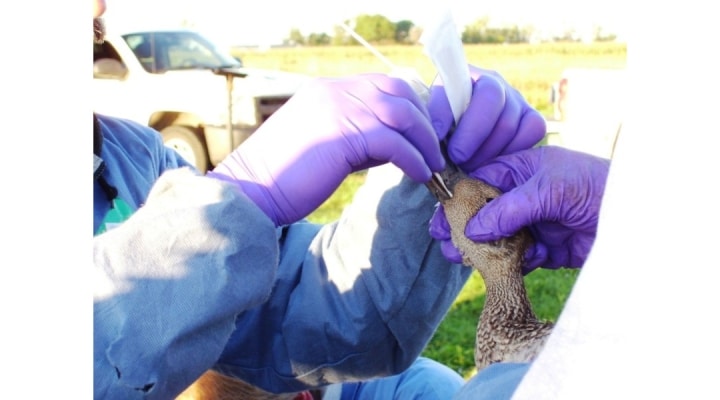 MANHATTAN, Kan. – Reports of avian influenza in bird flocks on the east coast and more recently in Indiana are important reminders for small and large poultry producers to remain vigilant on biosecurity practices, said a Kansas State University poultry specialist.

Scott Beyer said the U.S. poultry industry is always on the lookout for highly pathogenic avian influenza (HPAI) and other diseases that could affect birds. Recent news reports are a sign that surveillance efforts to identify and stem the spread of the disease work.

“If it’s present, we will find it,” he said, “because we are constantly looking for it.”

Avian influenza is a highly contagious viral disease that affects food-producing birds, including chickens, turkeys, pheasant, ducks, quail, guinea fowl and more. It is commonly spread by such waterfowl as ducks, geese and shorebirds.

The virus can spread between birds through contact with an infected bird, or by ingesting infected food or water. According to the Kansas Department of Agriculture’s Division of Animal Health, it is “extremely rare” for humans or mammals to contract avian influenza from an infected bird.

Because of extensive routine testing, Beyer said food products – eggs and chicken in particular — are not at high risk. “We want to make sure that it’s not even close to being a risk for the food supply.”

The last major outbreak in the United States occurred in 2015, dramatically affecting the egg industry. Beyer noted that 50 million birds were eliminated during efforts to control that outbreak.

Within the past month, “we’ve had small flocks in Virginia and wild birds in North Carolina that have tested positive (for avian influenza),” Beyer said. “Now, it seems like we may have some concerns with broilers and turkeys in Indiana through Kentucky.”

With spring arriving, birds will soon move south along major flyways located along the east and west coasts of the United States, or one of the two in the central part of the country.

“Birds go north and south, and when they do, they go into roosting, wintering and breeding grounds,” Beyer said. “Birds from other countries on the other side of the Earth sometimes mix with birds at the top, and they migrate down. They can pick the virus up there, and bring it down with them. It’s an age-old challenge; it’s been going on forever. We always have to deal with it.”

Beyer said health officials’ policy on avian influenza “is that we don’t tolerate it; we eliminate it.”

That translates into immediate action in which flocks are euthanized within a radius of where a positive test was found. That has proven reliable to keep the disease from affecting a much broader area.

“Now is a great time to put biosecurity plans in place,” Beyer said. “At Kansas State University (which maintains a poultry teaching and research unit), we started weeks ago when we saw the first east coast infections. Our biosecurity plan means staying away from other flocks, not trading animals, keeping your feet clean when you go into facilities, and more.”

Backyard bird owners and farmers with small flocks should also have a plan to keep their birds safe. Beyer suggests watching the waterfowl that visit farm ponds or other water sources – “mallard ducks in particular” – and avoid walking into animal facilities if you’ve walked around the pond.

He also suggests keeping feed areas cleaned up, so that you’re not attracting wild birds; and limiting the amount of time that you allow your small flock to be fed.

“This time of year, people have extra birds they want to sell,” Beyer said. “If they’re bringing them to the swap, there should be a testing program. Don’t bring birds to the swap if they’re showing any symptoms of sickness.”

Avian influenza is considered a reportable disease, which means once detected, it must be reported to federal, state or local health officials. Producers who suspect a problem should contact their veterinarian, local extension office, state veterinarian or the Kansas Department of Agriculture’s Division of Animal Health.

More information on the avian influenza and measures to protect poultry is available online from the Kansas Department of Agriculture.