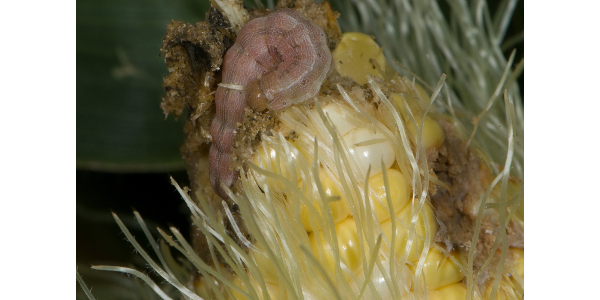 LEXINGTON, Ky. — Corn earworm, Heliocoverpa zea (Boddie), is the key insect pest in Kentucky attacking the kernels on tips of corn ears (Figure 1). Even low levels of infestation can be problematic since damage is concealed until the husk leaves are removed by consumers. Last year, we evaluated several management strategies for corn earworm control on late planted corn, including just relying on Bt traits.

Because corn earworm migrates from more southerly areas, and populations increase as the summer progresses, early-planted sweet corn is at a much lower risk of attack than are mid-season plantings. For this reason, corn earworm is aggressively controlled in the late season with insecticides used every 3 to 5 days during the silking period.

Similar to Bt field corn, Bt sweet corn has been genetically engineered with a proteins that kill certain caterpillars. It is very selective, generally safe to beneficial insects, and has been approved for commercial production since 1998. However, there are three types of Bt sweet corn technologies that have been bred in different varieties: Attribute I (Cry1Ab gene), Performance Series (Cry1A.105 and Cry2AB genes), and Attribute II (Cry1Ab and Vip3A genes). Each of these displays different levels of corn earworm protection. They are not considered “bullet proof” when corn is planted late as considerable earworm damage to Bt sweet corn may occur and supplemental insecticide sprays are recommended with high corn earworm populations.

Last year, we examined two Attribute I and one Attribute II sugar-enhanced varieties in a late-planting situation without the use of supplemental insecticide applications.

The study was planted June 20, 2016. Coragen and Warrior II were applied every 3 days during the silking period in the insecticide treatments. On August 24, ears were evaluated for the number of insect-damaged kernels per ear and live corn earworm larvae. An ear acceptable for local sales was defined in this study as an ear with 6 or fewer damaged kernels. Sweet corn for wholesale production should have less than 1% defective ears.

The late planting resulted in very high levels of insect pressure in this study with the untreated control sustaining 97.5 % damaged ears. The top treatment in the study was Aspire, an Attribute II Bt, which had the fewest damaged kernels (0.1 per ear), no live larvae in the ear, and smallest percentage of damaged ears (1.0%). The percentage of damaged ears with the Attribute I Bt lines were not significantly different than the control. When using a more tolerant level of six or fewer damaged kernels per ear that might be acceptable for local sales, the two Attribute I varieties had more marketable ears than the control. The Coragen and Warrior treatments had significantly more damage than Aspire (Attribute II) but less than the Attribute I varieties or the untreated control.

In summary, this study demonstrates the intensity of corn earworm risk with late plantings in Kentucky. Sweet corn planted in late April and early May and produced with insecticide applications for corn earworm can sometimes escape damage. Bt corn should not be used as a stand-alone tactic to manage corn earworm nor is it marketed that way by seed companies.

These lines are more resistant to corn earworm, but they frequently need some additional insecticidal control to avoid unacceptable levels of injury. This is particularly true with late plantings. Corn earworm remains a difficult-to-manage insect pest on late-planted sweet corn.

Table 1. Ear damage, number of corn earworms and percentage of damaged and marketable ears at harvest, 2016.