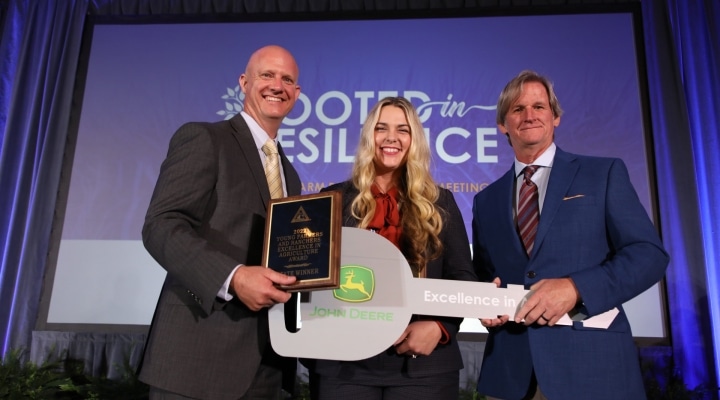 This competition is open to farmer and rancher members between the ages of 18 and 35 who do not derive the majority of their income from an owned farm operation.

“We are so proud of K’Leigh,” said Florida Farm Bureau President Jeb S. Smith. “K’Leigh is an outstanding representation of our young farmers and ranchers. Taking home this state honor is a true accomplishment.”

The Excellence in Agriculture Award recognizes young farmers and ranchers who do not derive the majority of their income from an agricultural operation, but who actively contribute and grow through their involvement in agriculture, their leadership ability and participation in Farm Bureau and other organizations.

Combs grew up on her family’s 7th generation working horse and cattle ranch, Diamond D Ranch in Jacksonville.  With a bachelors in Business Management, she uses her degree to balance the day-to-day responsibilities of running a ranch and educational outreach through the Agritourism program. Combs helps to educate more than 25,000 students a year on the importance of agriculture. She is married and has two children.

Runners-up for the Excellence in Agriculture competition included Marshal Sewell of Hillsborough County and Erin Jones of Gilchrist County.