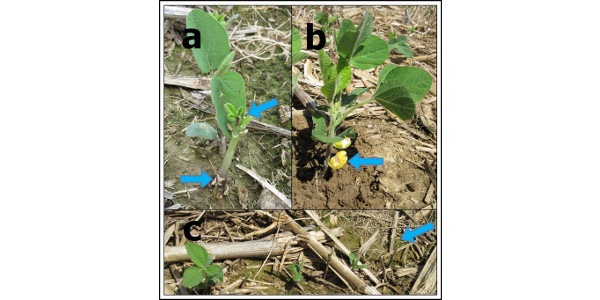 Figure 3. Different types of damage caused by slugs in soybean fields. (a) Arrows indicate complete detachment of cotyledon and cut tip, (b) rasping of cotyledonal leaves, and (c) different degrees of defoliation in contiguous plants, including plants without any foliage (Photos: Raul Villanueva, UK)

LEXINGTON, Ky. — “I haven’t seen a slug outbreak like this in 40 years of growing soybeans” was a comment of a soybean farmer in Logan County last Friday (June 9, 2017). He will replant 300 to 600 acres of soybeans. That same day a colleague visiting Calloway County told me that 300 acres of soybean there also need to be replanted. Similar issues are occurring in Caldwell, Trigg, Christian, and Todd counties.

Slugs and snails are well-known agricultural pests throughout the world, attacking a wide range of horticultural and field crops. In the USA, evidence of the agronomic impact of slugs is not well reported due to their sporadic outbreaks, but it is thought that invasive species are responsible for most of the damage caused in the past. They can cause significant losses in soybeans and other legumes. However, their presence and injuries caused in soybeans and corn appear to be more noticeable lately. There were reports of slug outbreaks in Henderson, Kentucky in corn in 2016, and more severe well-extended outbreaks are currently occurring in soybeans across several counties in Kentucky and neighboring states (Ohio, Illinois, Indiana) (Villanueva , personal communication).

Recent slug damage tallies on soybean seedling ranged from 5% to 95% (Figure 1). These soybean seedlings were observed with different degrees of feeding and defoliation in a survey conducted in fields through the counties mentioned above. Observed defoliation included partial feeding of true leaves (holes) (Figure 2), rasping of cotyledonal leaves, or complete defoliation of seedlings leaving only the stem (Figures 3a and 3b).

Snails and slugs are mollusks. They do not have legs, and to travel, they secrete a mucus from a gland located at the anterior part of their bodies. This mucus helps slugs and snail slide over a surface, leaving a “slime trail” that indicates their presence. Snails have a shell that protects their body, while slugs do not have a shell. Both have two pairs of retractable tentacles in the head. In the upper location are the optical tentacles with eyes; and in the lower position the sensory tentacles (tasting and smelling).

Snails and slugs prefer cool, moist habitats and can be found under logs, rocks, or pots. During the day, snails and slugs move deep into the ground. They become very active from sunset to sunrise.  During this time, slugs rasp leaf surfaces, may produce scars or holes on plants overnight, or completely kill small seedlings. The environmental conditions of the very mild winter of 2016-17 probably permitted a great number of adult survivors and egg laying in the spring of 2017. In addition, continuous rains, wet soils, and cloudy days are favoring population outbreaks of slugs. This condition increases when planting is conducted on no till fields.

Another important fact of snails and slugs is that many species are hermaphrodites. Hermaphrodites are organisms that have male and female reproductive organs and therefore can produce both eggs and spermatozoa. Also, mating, egg-laying, hatching, and development are not well-synchronized, even within a single species, so slugs of various stages of development can be found at many times of the year. However, it appears that newly hatched juveniles are responsible for most crop damage in spring. From June 9 to June 16, 2017, we have been finding eggs and different stages of slugs in soybean fields (Figure 4). Some immatures were as small as 1/8 inch lengthwise, making them difficult to spot during routine sampling.

Although, soybeans are resilient plants, they may not recover if there is significant feeding on leaves or stems. However, if the two cotyledons are eaten, plants may be affected, reducing planting density or producing empty spots in rows (Figure 3c).

Also, it is important to notice that aparently most of the damage this season has been caused by slugs; however, there are several species of snail that might be feeding in soybeans (Figure  5). In some cases snail are difficult to distinguish because they are camouflaged easily by the background.

Cultural practices that should be considered to avoid damage in soybeans by slugs are conducted during planting and soil cultivation. During planting, rows should be straight and 1 to 1.5 inches deep, but no deeper than 2 inches in order to avoid germination delays and reduce the opportunity of snail feeding. During cultivation, the hatch should not cover adjacent rows, so small plants or seedlings are not under this substrate.

In Kentucky, most farmers are committed to no-till or reduced-till practices. Tillage certainly may help control slugs; however, this may not be an option to reduce surface residue. Nevertherless, some type of superficial disking in spring may be an option to decrease slug populations.

There is information on the Internet to control slugs; however, much of this can be misguided. The applications of muriate or potash salts (a fertilizer) on repeated occasions is a recommendation. However, there are no data that shows the benefits of this application.

I have received inquiries about the use of insecticides. Some carbamates might be effective, but many of them have already been phased-out. For example, Sevin has been effective when formulated as a bait, but is ineffective when applied as a spray; furthermore it is not registered for this purpose. My recommendation is to avoid insecticides to control mollusks.

A registered molluscicide to control slugs and snail is a metaldehyde bait (e.g., DEADLINE M-PS mini pellets). In 2016, large numbers of snails were observed killed one day after pellets were applied in a corn field in Henderson County, Kentucky (KPN August 9, 2016), although, tallies of slugs were not conducted before or after the application.

Given the current environmental conditions with continuous rains and misty mornings, I think that even farmers who are replanting soybeans or double crop soybean can be at risk of a slug attack again. Continuous monitoring for these pests is necessary. Please see the links below for more information on slugs. Rates and further information for the use of metaldehyde are provided in Table 1.

Table 1. Rates of Dealline M-PS Mini-Pellets (metaldehyde) for different stages of growth for corn and soybeans.

For more information, refer to the following: