Home / California / Molecule masterminds elaborate growth process
A new user experience is coming! We'll be asking you to login to your Morning Ag Clips account March 1st to access these new features.
We can't wait to share them with you! Read more here. 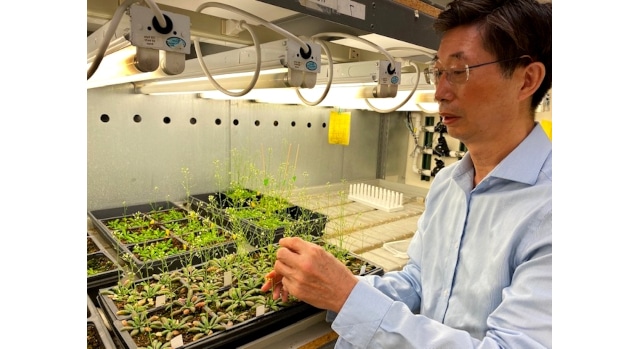 RIVERSIDE, Calif. — A team of researchers led by UC Riverside has demonstrated for the first time one way that a small molecule turns a single cell into something as large as a tree. For half a century, scientists have known that all plants depend on this molecule, auxin, to grow. Until now, they didn’t understand exactly how auxin sets growth in motion.

The word auxin is derived from the Greek word “auxein,” meaning “to grow.” There are two main pathways that auxin uses to orchestrate plant growth, and one of them is now described in a new Nature journal article.

“Cellulose works like rebar in a high rise, providing a broad base of strength. It’s reinforced by hemicellulose chains and sealed in by pectin,” said UCR botany professor and research team leader Zhenbiao Yang.

These components define the shape of plant cells, resulting in sometimes-surprising formations like the puzzle-piece-shaped leaf epidermis cells that Yang has been studying for the last two decades. These shapes help tightly glue cells together and provide physical strength for plants against elements such as the wind.  With everything locked so tightly by the cell walls, how is movement and growth possible?

One theory posits that when plants are ready to grow, auxin causes their cells to become acidic, loosening the bonds between components and allowing the walls to soften and expand. This theory was proposed half a century ago, but how auxin activates the acidification remained a mystery until now.

Yang’s team discovered auxin creates that acidity by triggering the pumping of protons into the cell walls, lowering their pH levels. The lower pH activates a protein, expansin, appropriately named because it breaks down links between cellulose and hemicellulose, allowing the cells to expand.

“Like a balloon, expansion depends on how thick the outsides are, versus how much air you’re blowing in,” Yang explained. “Lowering the pH in a cell wall can allow water outside of a cell to move in, fueling turgor pressure and expansion.”

There are two known mechanisms by which auxin regulates growth. One is the pH lowering that Yang’s team described. Another is auxin’s ability to turn on gene expression in the nucleus of the plants’ cells, which in turn increases the amount of expansion and other growth-regulating factors in the cell.

The latter mechanism also lowers the pH of the cell and facilitates growth. UC San Diego professor of cell biology Mark Estelle is a leading authority in this field. He discovered and researches this other mechanism.

“Dr. Yang’s recent work represents a significant advance in our understanding of how auxin regulates cell expansion. It’s been known that acidification of the extracellular space promotes cell expansion but it wasn’t known how this happens,” Estelle said. “It’s exciting to see an old problem being solved.”

It is an understatement to say that auxin simply “contributes” to plant growth. It is essential to nearly every aspect of a plant’s growth and development, including aspects that are important to agriculture such as fruit, seed and root development, shoot branching, and leaf formation. Even the plant’s correct responses to gravity and light depend on auxin to ensure roots head down while the shoots grow up toward light.

Not only could a deeper understanding of auxin benefit agriculture and renewable energy production, it could one day influence medicine as well. “Understanding how the basic biology works may eventually have an impact on human health,” Yang said. “As our knowledge expands, we may learn that processes in humans are analogous.”