Subscribe
Home / Michigan / Molds and mycotoxins in your 2018 corn crop 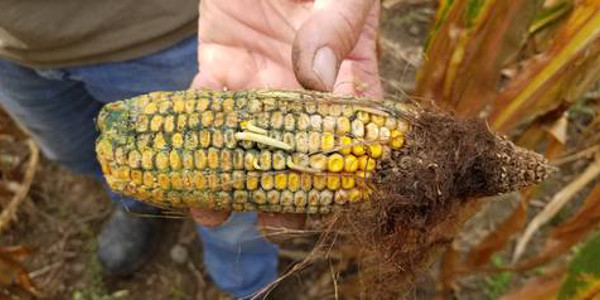 EAST LANSING, Mich. — Farmers familiar with mycotoxins in corn grain or silage should be scouting their fields to see if there are potential problems lurking ahead. Many may think mycotoxins are an isolated event, but about an estimated 25 percent of crops worldwide are affected annually with mycotoxins. The molds of the highest concern in Michigan are Gibberella ear rot and Fusarium ear rot. Each of these can produce mycotoxins. Mycotoxins are extremely stable and heating, freezing, roasting or treating with chemicals cannot reliably reduce mycotoxin levels within kernels.

Michigan State University Extension and MSU Diagnostic Services have confirmed corn with Trichoderma and Fusarium ear rot from samples taken in Michigan’s Thumb. These issues can affect grain quality, depending on the severity in the field.

Trichoderma ear rot is observed occasionally and no associated mycotoxins have been reported. Trichoderma ear rot appears as a dark green to dark blue mold that grows on or between the kernels and husk, often covering the entire ear. Mechanical and insect injury as well as damage by birds to developing ears also provide points of entry into the husk. One of the common results of Trichoderma is kernel sprout in the husk.

Fusarium species can produce the mycotoxins known as fumonisins. Fumonisins are acutely toxic to animals, especially pigs and horses, and have been linked to increased cancer rates and other human health problems.

Fusarium ear rot appears as a white to purple, cottony mold and can start anywhere on the ear, but affected kernels may be scattered or clustered throughout. This disease occurs under a wide range of weather conditions, but high temperatures, drought stress before and after silking, and insect and mechanical damage favor infections. It can continue to spread on the infected ear until grain is below 18 percent moisture, so observed fields with this disease should be harvested as soon as possible following black layer.

Gibberella ear rot a common disease throughout the Midwest, Northeast U.S. and in Ontario, Canada. This fungus also causes Gibberella stalk rot on con and Fusarium head blight on wheat and barley.

Gibberella can be identified by a red or pink mold that frequently develops at the tip of the ear and then grows down towards the shank. In severe cases, the pink mold is visible on the outside of the husk at the ear tip.

The fungus produces deoxynivalenol (DON and vomitoxin) and zearalenone. These are important in the Northern U.S. Corn Belt and Canada. Animals may refuse to eat grain containing DON. Animals that consume zearalenone can experience infertility and abortion, along with other breeding issues. Areas that have damage from insect feeding, such as western bean cutworm, may have higher infections for the ear rot. This ear rot also continues to spread on infected corn past R6 and until grain is below 18 percent moisture.

If producers inspect their fields and find moldy corn, submit samples to MSU Diagnostic Services for proper identification. Mycotoxin producing molds can often be confused with other ear rots.

Should you plant earlier maturing soybeans?

A2 milk claims referred to FTC