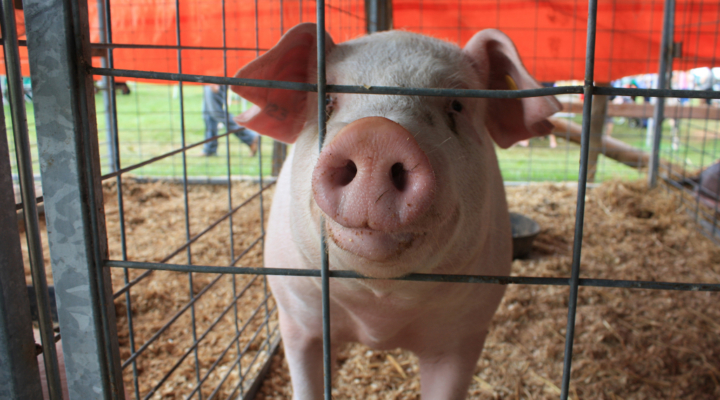 Animal numbers for the 2017 show were a bit lower than usual, however the quality of the animals was top notch, according to Ben Weikert from SUNY Cobleskill who acted as official judge. (Montgomery County Planning Commission, Flickr/Creative Commons)

FRANKFORT, N.Y. — The 4th Annual Mohawk Valley Regional 4-H Livestock Show & Sale took place on Saturday, September 23 at the Herkimer County Fairgrounds in Frankfort, NY. The fall show & auction is open to 4-H members from Herkimer & Oneida Counties. Animal numbers for the 2017 show were a bit lower than usual, however the quality of the animals was top notch, according to Ben Weikert from SUNY Cobleskill who acted as official judge. “These are some of the best market hogs and market lamb I have had pleasure of judging on the east coast this year. These 4-Her’s should be proud of the quality product they have raised” Weikert commented in his reasons.

Taking home top honors as grand champion beef steer was Laken Dyn, with her 1170 pound steer “Bear”. Seth Donahoe’s 1415 pound steer “Simba” was second in the market class followed by Sam Donahoe’s 1370 pound steer “Tyrone”. They all received blue ribbons. Anna Hawkes exhibited the only prospect steer, but “Scout” didn’t have to stand alone as he was brought in and named reserve champion of the beef show as well as best bred and owned, one of the highest honors to receive at a show. Anna was also named Master Showman of the beef show.

During the hog show, four high quality animals were presented before judge Weikert. Champion market hog went to Christopher vanLieshout with “Vin” weighing in at 260 pounds. Reserve champion honors were awarded to David Vanderhoof and his 268 pound hog “Wade”. David and Wade were also named Master Showman of the hog show. Christopher vanLieshout’s second entry in the class, 280 pound “Dwayne” came in 3rd and Laken Dyn’s 272 pound hog “Duke” rounded out the class, all receiving blue ribbons. Christopher’s champion market hog was also selected as Supreme Livestock by the judge and received a wheelbarrow full of show supplies which was donated by Herkimer County Farm Bureau & Herkimer County Dairy Promotion.

The lone market lamb was exhibited by Abigail Wratten could have stood a lot of competition as this 130 pound market lamb was top notch and well deserving of being named champion market hog.

All of the animals shown in the market classes along with five lots of meat chickens were then put up for auction on Saturday evening following the show. Thanks to the amazing generosity of the buyers and bidders, the 4-H youth were able to leave the auction with some startup money for their next livestock project. Meat chickens were sold in pens of two. Sellers included Elizabetth & Rebecca Schieferstine, Anna Hawkes and Laken & Dylan Dyn. Buyers of the meat birds were Barber Farm of Angola, Brabent Farm of Verona, G&T Farm of Richfield Springs (purchased two lots) and Adam McFarland with Agri-King. Selling next were the market steers. Laken’s champion was the first steer through the ring and attracted several buyers. The gavel landed on Doug Thompson’s (G&T Farm) final bid. Mr. Thompson then graciously donated the steer back to the 4-H auction program. Empire Livestock then purchased the steer on its second time through the auction ring. Seth’s steer demanded the highest dollar per pound and was sold to Clinton Tractor & Implement Company who also, very generously donated the steer back to the program. The second time through, the steer was sold to Jesse Marsh with the Don Marsh Insurance Agency for even more than it sold the first time! Rounding out the steers, Sam’s sold to Clinton Tractor & Implement Company. Next in line was Abigail’s market lamb, earning top dollar from Otsquago Farm (Connie Young) of VanHornesville. Selling last were the hogs, but not to be out done, they also, brought top dollar. Christopher’s champion hog led the way being purchased by Tom Junglen of Cargill Animal Nutrition and also, very graciously donated back to the program. Second time through the ring, it was purchased by Brabent Farm. Christopher’s second hog was also very successful in the sale ring, being purchased by Farm Credit East and also donated back, then being purchased by Tom Junglen of Cargill. Tri-Valley Family Practice of Vernon purchased David’s reserve champion hog and Jesse Marsh of the Don Marsh Agency was the last to bid on Laken’s hog to round out the auction.

4-H youth work year round on their livestock projects, both raising the animals and securing buyers for the auction. They are learning how to raise the best quality market animals as well as how to market their finished products. We would like to extend a huge thank you to all of those that have supported this program for the past four years, especially all of the buyers and sponsors. In addition to all of the buyers mentioned above, sponsors include: Herkimer County Fairgrounds, CaroVail, Empire Livestock, Central New York Farm Progress Show, Herkimer County Farm Bureau, Herkimer County Dairy Promotion, Herkimer Wood Products, ATRASS Farm & Brown’s Feed.

For more information on this and other 4-H programs offered by Cornell Cooperative Extension of Herkimer County, please contact 315-866-7920.

In praise of messiness