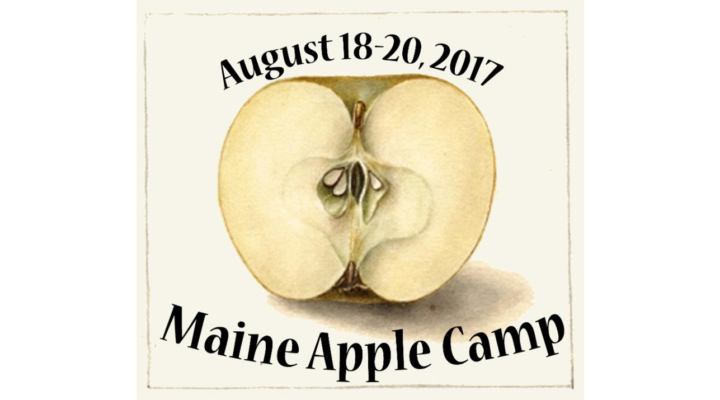 Sessions will cover everything from community orchards to MOFGA's conservation efforts at the Maine Heritage Orchard. The organizers hope that participants with all kinds of interests will come together to plot and plan how to make the Maine heirloom fruit renaissance even more successful. (Courtesy Photo)

The gathering will take place at a traditional lakeside camp setting where the Maine Fiddle Camp has operated for several years, and through workshops, small group meetings and informal conversations, we hope to build momentum to bring back the thousand or more traditional varieties of apple and pear that used to grace orchards and yards all over Maine.

Maine probably has one the highest levels of biodiversity of these traditional heirloom fruit because of the multiple waves of introduction of fruit from the 17th to the 20th centuries. Some, such as the Baldwin or Red Astrachan, may be familiar to a number of Maine residents; however, rare and lost varieties are scattered across the state in relict orchards and dooryards from Aroostook County in the north, where French and Canadian apples appear, down to York County, where early 17th-century orchards were established by English colonists.

The Maine Apple Camp will introduce participants to the diversity of American apples with author Dan Bussey of Seed Savers Exchange. Bussey has spent decades documenting the tens of thousands of apple varieties grown in the United States. He will discuss the process of writing his seven-volume history of American apples. Maine’s own John Bunker will address efforts to track down, document and preserve the varieties that survive across the state today.

Program tracks for the camp are Conserving Heirloom Fruit, Artisanal Cidermaking, Heirlooms in the New Food Economy, and Polyculture and Organic Orcharding. Cidermakers from around New England will share their expertise on everything from varieties that make great cider to how to make the best ciders with wild yeast. Conservation advocates will lead workshops on tracking down, researching and identifying lost and forgotten varieties.

The idea is to build expertise that can lead to rediscovering varieties that are patiently waiting for us to find them. Also, we will have folks supplying us with all the food we want and showing how heirlooms can reappear in produce sections and value-added products.

Sessions will cover everything from community orchards to MOFGA’s conservation efforts at the Maine Heritage Orchard. The organizers hope that participants with all kinds of interests will come together to plot and plan how to make the Maine heirloom fruit renaissance even more successful.

Registration includes all meals and lodging in the camp’s cabins or campground as well as participation in workshops and sessions. For more information and to register visit www.mofga.org or call (207) 568-4142.