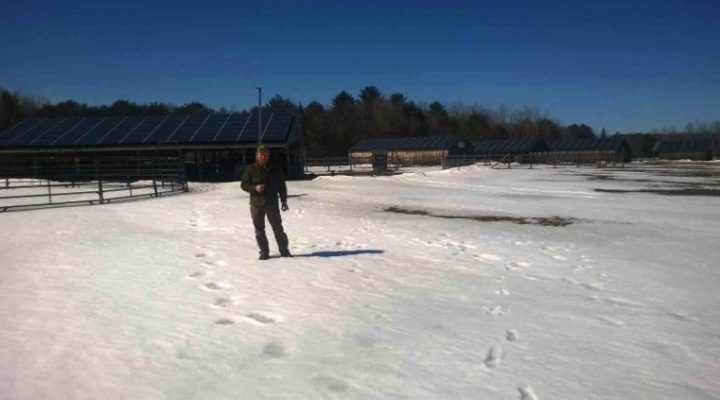 UNITY, Maine — The Maine Organic Farmers and Gardeners Association (MOFGA) took a giant step toward energy self-sufficiency this spring when it flipped the energy switch to solar power at the Common Ground Education Center in Unity. With inspiration, guidance and generous financial support from Liberty-based ReVision Energy, MOFGA dramatically expanded its renewable energy infrastructure by installing a 102.08 kilowatt solar array and air source heat pumps. After almost twenty years at its home in western Waldo County, MOFGA is fulfilling its dream of becoming self-sufficient with energy.

“This is a big deal for all of us at MOFGA,” said Jason Tessier, MOFGA’s Buildings and Grounds Director. “Since we arrived in Unity in 1998, we have taken a conservation approach to building, and we have installed small-scale, innovative energy-generating facilities to reduce our dependence on fossil fuels. We exhibit the possibilities for visitors, especially at our Common Ground Country Fair each September. With this larger solar power system in place, MOFGA will generate all the electric power it needs year-round, including for the Fair. We’re also offsetting about 85% of our heating fuel. We are so grateful to Revision Energy for all they have done to help move this project forward.”

For several years, MOFGA has partnered with ReVision Energy to accelerate the plan for energy self-sufficiency.

“Maine has an abundant solar resource that is vital to our farming community but can also be harvested to reduce our energy costs and carbon pollution,” said Bill Behrens, co-founder of ReVision Energy. “This solar project dramatically increases MOFGA’s long-term economic and environmental sustainability by locking in the low cost of clean, renewable solar electricity for the next four decades,” said Behrens, who also noted that modern solar technology comes with a 25-year warranty and 40-year expected useful lifespan.

“We are grateful for the natural partnership we have developed with MOFGA over the past 10 years and look forward to working together to use the Common Ground Education Center as an ideal venue to inspire the general public about using Maine’s solar resource to reduce energy costs, create good-paying jobs and to increase our energy independence and security.”

Since 2003, ReVision Energy has grown from two guys working out of a Liberty, ME garage to more than 155 employees in five locations today. Behrens attributed the company’s success to its mission to transition northern New England from finite, polluting fossil fuels to renewable energy combined with battery storage, efficient heating and cooling appliances and electric vehicle charging. “We are proud to be a certified B-Corp, which means we are running the business to create maximum positive impact for everyone rather than the traditional approach of maximizing returns for a small group of shareholders,” said Behrens. Other B-Corps include Ben & Jerry’s Ice Cream, Patagonia, King Arthur Flour and Maine-based Atayne athletic wear.

Located on 300 acres of mixed farmland and forest, MOFGA’s Common Ground Education Center provides ample space for the organization’s renowned Fair while serving as an exciting venue for year-round educational programs. A key part of this programming is an assortment of small-scale energy systems that visitors may view and recreate in their own homes or on their farms. Aspects of design for conservation and energy efficiency include:

“Each of these components was an important step along our path to energy self-sufficiency,” said Tessier. “But now we really can demonstrate that it’s possible to shed our dependence on fossil fuels and embrace a clean and dependable source of energy.”

Solar power was the leading source of new electric generation capacity installed in the U.S. last year, and community solar played an important role in the growth. Unfortunately, Maine lagged way behind in solar power installations. While solar power jobs increased by 25% last year across the nation, Maine ranked last in New England.

MOFGA is achieving its renewable energy goal while solar policy debates are flaring in Augusta. Notably, Governor LePage is pressuring Maine’s Public Utilities Commission to roll back benefits for customers with solar arrays who receive compensation for energy they return to the power grid. MOFGA and ReVision Energy join Maine’s Environmental Priorities Coalition in supporting progressive state legislation on this issue, specifically An Act to Protect and Expand Access to Solar Power in Maine, sponsored by Senator Seth Berry of Bowdoinham. The bill will:

“MOFGA remains hopeful about the future of solar power for farmers, businesses and families in Maine,” said Tessier. “Farmers have to be optimistic about the future. We do everything we can to plan, but some variables are just beyond our control. Locking in energy costs by generating our own power strengthens our business plans and helps us succeed financially. Community generation of renewable, reliable energy is essential not only for a clean environment, but also for a healthy economy.”

MOFGA is happy to provide a scalable model for anyone interested in solar power systems, and is hoping that policymakers in Augusta will blow away the dark clouds hovering over the state’s solar energy legislation.

Lawmaker to back off foraging restrictions