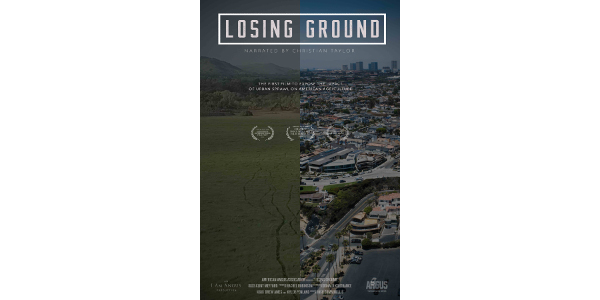 Farmers and ranchers face a lot of challenges—Weather. Policy. Markets. One of the growing issues is the increasing urbanization taking over farm and ranch land across the U.S. To help spread awareness about this growing issue, the American Angus Association® produced the first film to expose the impact of urban sprawl on American Agriculture – Losing Ground—an I Am Angus® production. The Missouri Farm Bureau selected Losing Ground to be shown during the Annual Meeting, Saturday, Dec. 7.

The documentary features five Angus farm and ranch families who talk about the challenges and opportunities they have experienced with urban sprawl in their areas. The Lovin family, Lexington, Georgia; Marsh family, Huntley, Illinois; Stabler family, Brookeville, Maryland; Cropp family, Damascus, Maryland; and the Nelson family, Wilton, California, discuss how urban sprawl has impacted them, and American Farmland Trust CEO John Piotti talks about their research report “Farms Under Threat,” which shows the issue on a national level.

“It’s easy to drive through, especially the Midwest, and feel like we have plenty of land,” said Josh Comninellis, film director. “But, it’s a little more complicated than that as we dug into the research. Not only are we losing some of our best ground and a lot of total agricultural land, but the population, and therefore demand, is going up. When you pair those two things together, you see, down the road, a really dire situation emerging.”

According to the American Farmland Trust “Farms Under Threat” report, we’re losing 1.5 million acres a year, which breaks down to 175 acres every hour and three acres a minute. That trend is unsustainable, and a common ground needs to be reached between the population’s need for more housing and retail and agriculture’s need to produce food.

“There are a few documentaries out there talking about urban sprawl from an urban point of view, but there was nothing out there talking about the impact on farmland,” Comninellis said. “There is nothing talking about cities spreading and taking over farmland and the implication for our food supply. So, we decided to tackle the issue through the eyes of Angus producers, and we think ‘Losing Ground’ gives us the opportunity to help educate consumers while establishing connections with their rural counterparts.”

Education is the key to bridging the gap between farmers and ranchers and those who live in urban areas. The film strives to spread awareness for a rising issue for rural America and provide content for the agriculture community to share, as well.