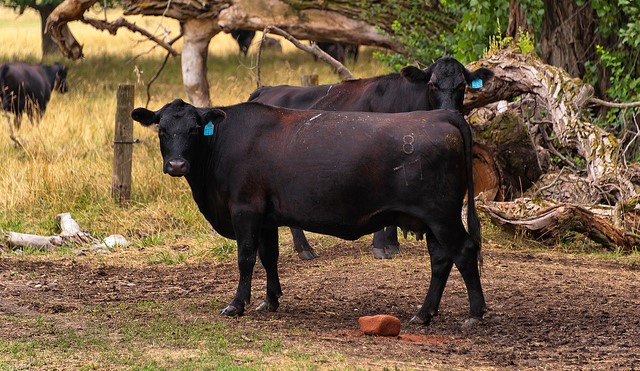 RENO, Nev. (AP) — Sheriff’s deputies and state agriculture officials are investigating the disappearance of as many as 200 cows in northern Nevada over the past year that may have been stolen by modern-day cattle rustlers across rangeland covering hundreds of square miles.

Investigators haven’t uncovered any proof that thieves took the animals, but authorities in Humboldt County say it would be an uncommonly large number of animals to have died on the range over the winter.

“This is unusual for our area,” Humboldt County Sheriff’s Lt. Sean Wilkin told The Associated Press, adding he’s not aware of any similar incidents in recent years.

Fifty cows or calves were reported missing in late March and early April when ranchers counted their herds as they moved them off their winter grazing range in Paradise Valley about 200 miles (320 kilometers) northeast of Reno and 50 miles (80 kilometers) south of the Oregon line. The animals belonging to the Ninety-Six Ranch are Hereford and black Angus mixes with “96” and the year of birth branded on the left hip.

The disappearance comes about a year after 150 cattle were reported missing in April 2017 on a series of ranches operated by Orovaco in northern Humboldt County farther east toward the Elko County line.

Wilkin said it is possible some of the cattle could have died on the range and their carcasses haven’t yet been discovered.

“It is a lot of land to check. We are talking hundreds of square miles,” he said.

But he thinks that is unlikely, giving the missing animals make up about 10 percent of the herds.

“I’m staying away from the words ‘stolen’ or ‘theft’ because we don’t have suspects or evidence of a crime,” Wilkin said. “However, it is likely the cattle are in fact missing. If they were taken, it would have taken multiple trucks to haul them away.”

Depending on the size of the animals, he estimated 30 to 50 would fit in a single tractor-trailer load.

“At this point, we haven’t received any tips that would produce any leads on this. So we are reaching out to the media in hope that helps develop something,” Wilkin said.

Doug Farris, the Nevada Department of Agriculture’s animal industry division administrator, issued a statement earlier this month confirming the cattle are missing and reminding ranchers they must report allegations of stolen cattle to the state’s livestock identification program or a state department enforcement marshal.

“If you suspect missing cattle on your operation, please contact us immediately,” he said.

But Farris said in an email to the AP that his agency has no evidence the cattle in Humboldt and Elko counties were stolen.

“We receive reports of missing livestock from all over the state, and there is no reason to believe these two reports are related. Most missing cattle show up on the ranch property or on a neighboring ranch property when more extensive gathering is done or when inclement weather sets in,” he said.