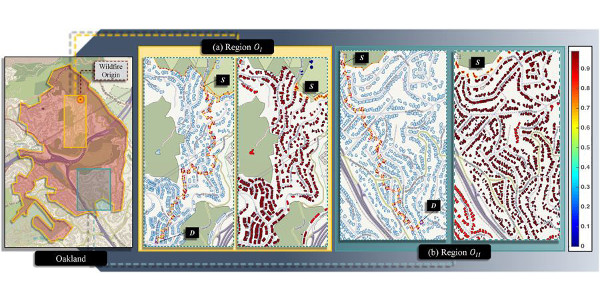 A region of Oakland affected by a 1991 wildfire showing the point of fire origin. Two regions are selected for analysis with different wind directions. For both regions, vulnerability for each direction is calculated from the source in their respective layouts. Significantly high vulnerability of all ways is observed in both layouts in the absence of any fire mitigation (Credit: Hussam Mahmoud and Akshat Chulahwat/Colorado State University; OpenStreetMap)

FORT COLLINS, Colo. — Firefighters know all too well that fires spread quickly, igniting chains of forestland made vulnerable by dry weather, and driven by wind.

Through propagation models, scientists capture potential behavior of wildfires as they spread and grow; such models are routinely used by emergency managers to help prepare for forest fire season. However, less is empirically known about the behavior of such fires as they cross into housing developments and other human-populated areas.

Disaster-mitigation experts in Colorado State University’s Walter Scott, Jr. College of Engineering wanted to bring attention to the complexity of the so-called wildland-urban interface of fires. They’ve developed a model that attempts to quantify the vulnerability of a community of homes to the spread of a fire. They hope their model could add to the strategic toolbox that protects lives and livelihoods from destructive fires.

The model the researchers are calling AGNI-NAR – Asynchronous Graph Nexus Infrastructure for Network Assessment of Wildland-Urban Interface Risk – was developed by Hussam Mahmoud, associate professor in the Department of Civil and Environment Engineering, and Akshat Chulahwat, a graduate student in civil engineering. Their work is published in the open-access journal Scientific Reports.

“Our ultimate motivation is to highlight new strategies to mitigate potential risk for wildland-urban interface fires, which has historically been a one-size-fits-all approach,” Mahmoud said. “Our model clearly shows us that this is absolutely not sufficient.”

To develop the model, they relied on tried-and-true methods based in graph theory, which has been used to model complex networks such as transportation zones or disease transmission. The researchers reasoned that they could apply similar principles to the way a fire behaves; much like a pathogen jumping from host to host and spreading disease, a fire also jumps from one structure to another, multiplying as it propagates.

The researchers used data from the 1991 Tunnel Fire that destroyed parts of Oakland, California, to test and validate their model. One of the questions they considered was whether there was a measurable relationship between the probability of ignition of a fire and the risk of that fire spreading to a nearby community. They considered that a community could be surrounded by ignition-ready wildland, and a hot summer would increase probability of ignition. But without wind, the community would be at nearly no risk. Wind speed and direction are critical to fire spread, and were well-represented in their model. Their main areas of consideration were convection, conduction, radiation and fire embers.

The goal is to help provide practical guidance for urban planners or emergency managers as they assess the risk of fires to homes and groups of homes. For example, the researchers found they could determine which homes in a given neighborhood layout would be most likely to contribute to the spread of a fire, based on location, size, and proximity to other homes. Such information could help inform mitigation strategies for that community, such as structural improvements, better spacing, or cutting back vegetation.

In future studies, the researchers will continue refining and verifying their model with data from other historical fires.

Vote to be held on Millet Marketing Order