Home / New York / Mobile ‘Maple Experience’ a huge success
A new user experience is coming! We'll be asking you to login to your Morning Ag Clips account March 1st to access these new features.
We can't wait to share them with you! Read more here. 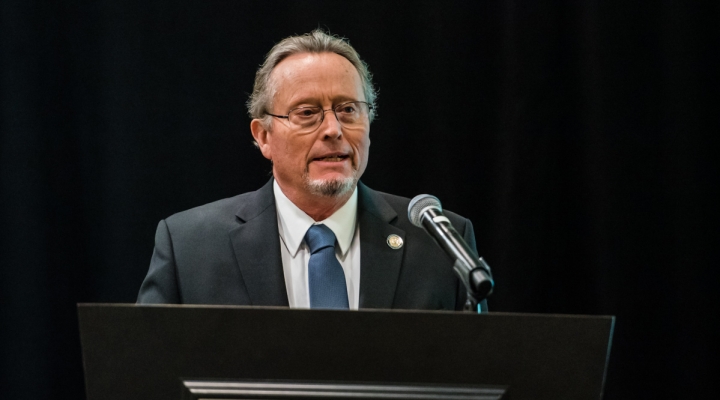 Agriculture Commissioner Richard A. Ball said, “The Department is proud to support the New York State Maple Producer’s Association and I’m delighted to see how many people have tapped into this resource, which shines a spotlight on New York State’s maple industry, including our ranking as the second-biggest maple syrup producer in the nation and its impact on our agricultural economy.” (Photo: Eric Jenks)

ALBANY — New York State Agriculture Commissioner Richard A. Ball today announced that more than 12,000 visitors have toured the Maple Experience, a new mobile exhibit that educates students and adults about the State’s maple industry. Owned and operated by the New York State Maple Producers Association, the 24-foot-long trailer traveled more than 3,000 miles in 2019, since it was unveiled at the Great New York State Fair on August 26. Visitors from Manhattan to Rochester have seen first-hand educational demonstrations featuring the history, process and success of New York State’s maple industry, which produced 820,000 gallons of maple syrup in 2019, marking a 75-year record.

Maple Experience was funded by a grant secured by Assemblywoman and Assembly Agriculture Committee Chair Donna Lupardo, as well as private donors. The mobile educational exhibit allows visitors to learn about the early discovery of maple syrup and observe the production process, including how trees are tapped and sap is extracted, collected, boiled, evaporated and subject to reverse osmosis. Hands-on interactive displays include modern power drills and plastic tubing syrup lines, as well as traditional bits and wooden sap spouts. The experience wraps up with tastings of samples of real maple syrup and maple syrup products.

Agriculture Commissioner Richard A. Ball said, “I want to thank Assemblywoman Donna Lupardo for funding this entertaining and educational exhibit, which allows young people and adults across New York State to learn about maple and its longstanding traditions. The Department is proud to support the New York State Maple Producer’s Association and I’m delighted to see how many people have tapped into this resource, which shines a spotlight on New York State’s maple industry, including our ranking as the second-biggest maple syrup producer in the nation and its impact on our agricultural economy.”

Assembly Agriculture Committee Chair Donna Lupardo said, “Interest in local maple products has really taken off, especially now that we have the “Maple Experience” mobile exhibit. It’s very exciting to see students’ reactions to the demonstrations and taste real maple syrup, often for the first time. The Maple Producers’ Association has done a terrific job complementing our ongoing commitment to agricultural education, which has tremendous benefits to both producers and consumers.”

In just over four months, approximately 6,000 students from 15 schools in the Bronx, Brooklyn, Manhattan and Queens have toured the Maple Experience in New York City. The mobile exhibit has also visited schools in Binghamton, Herkimer, Johnson City, Camden, Old Forge, Rome and Rochester, as well as SUNY Morrisville, the New York State Fair and the Mid-Winter Classic in Syracuse, hosting a total of more than 12,000 guests across the State.

NYS Maple Producers Association Executive Director Helen Thomas said, “Most students today are from suburban and urban areas, and do not get the opportunity to see farming operations firsthand. This mobile educational classroom allows us to take the farm to the student and to give them a window into where their food comes from. We train fellow students – FFA members from across the state – to demonstrate and explain. The event will be remembered by both groups of students as a highlight of their schoolyear.”

NYS Maple Producers Association Maple Support Specialist Keith Schiebel said, “Maple is one of the fastest growing industries in New York. We’re very excited to be able to use the Maple Experience to share real, pure maple syrup and related products with people in all corners of the state, especially students.”

The 2019-20 State Budget included $63,000 to design and launch the Maple Experience to expand educational outreach throughout New York State. Another $15,000 was funded through a Genesee Valley Regional Marketing Authority Grant and a $1,000 contribution from Farm Credit East.

In addition to legislative funding, the Maple Experience was supported by private industry, as well as corporate sponsorship by CDL USA and CDL dealers across the State.

Those who are interested in having the Maple Experience visit their students should email mapleexperience@nysmaple.com

The Maple Experience builds on the support New York State continues to provide to the maple industry, from participation in the New York State Grown & Certified program to a recent $500,000 investment in Cornell University’s Maple Program’s Arnot Teaching Forest for additional research and to renovate the 1950’s era sugarhouse to a state-of-the-art facility for expanded processing.

Maple producer participation in the New York State Grown & Certified program tripled from 2018 to 2019, with more than 71 producers from across the State enrolled in the marketing program. The program increases exposure for New York’s maple producers, who rank second in the nation in syrup production.

A maple producer must also participate in an environmental management program that promotes sustainability and keeps forests healthy and productive, such as the New York State Agricultural Environmental Management program, which is administered through the Soil and Water Conservation Districts, or the Certified Tree Farmer, administered by the American Tree Farm System.  To find out more or to join the program, visit certified.ny.gov.