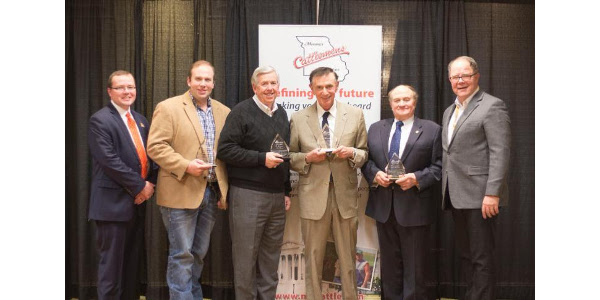 The inaugural class of the Missouri Farmers Care Hall of Fame was inducted during the evening banquet held in Columbia, Mo. The distinction was bestowed on key leaders who dedicated time, talent and resources to craft and promote Amendment 1, the Missouri Farming Rights Amendment. Passed in 2014, state agriculture groups united under Missouri Farmers Care to endorse the constitutional amendment that protects farmers from harmful, misleading, and unnecessary legislation driven by out-of-state activist groups.

Matt and Kate Lambert of Uptown Farms near Laclede, Mo., were also recognized as the 2017 Leopold Conservation Award Program recipients. The Leopold Conservation Award is a national program that recognizes voluntary conservation efforts taking place on working lands. Presented for the first time in Missouri, the award showcases the actions of the state’s farmers and ranchers to help create clean air, clean water and abundant wildlife for Missourians to enjoy.

“Matt and Kate are building on generations of stewardship and innovation by adopting practices to enhance their care of the land while improving productivity and telling their story to consumers,” said Dr. Alan Wessler. “Aldo Leopold, for whom the award is named, is quoted as saying, ‘The landscape of any farm is the owner’s portrait of himself.’ Matt and Kate are creating a masterpiece.”

A video (below) highlighting the technology and innovations the Lamberts use to produce food while enhancing the environment was unveiled during their award presentation. 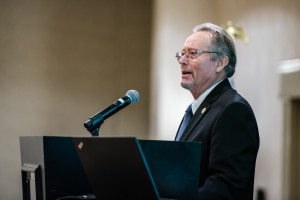 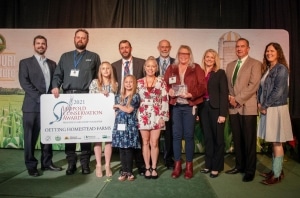 JEFFERSON CITY, Mo. — Oetting Homestead Farms of Concordia, Missouri, located in Lafayette County, has been selected as the recipient of the 2021 Missouri Leopold Conservation Award®. This award, named after renowned conservationist Aldo Leopold, recognizes farmers, ranchers and foresters who inspire others with their dedication to land, water and wildlife habitat management on private […] 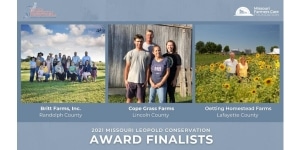 JEFFERSON CITY, Mo. — Three finalists have been selected for the prestigious 2021 Missouri Leopold Conservation Award®. Given in honor of renowned conservationist Aldo Leopold, the award recognizes farmers, ranchers and forestland owners who inspire others with their dedication to land, water and wildlife habitat in their care. “The finalists for this year’s Leopold Conservation […]