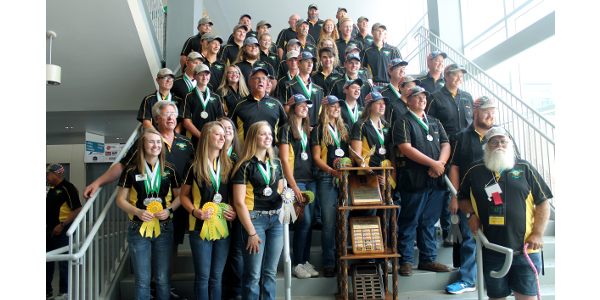 For the fourth time, Missouri 4-H brought home the championship title at the 4-H Shooting Sports National Championships, June 24-29 in Grand Island, Neb. Seven of Missouri's nine teams placed in the top five in their disciplines, including first place in compound archery. Eleven Missouri shooters ranked in the top 10 in the individual standings. (Courtesy of University of Missouri Extension)

This is the fourth time in the event’s 15-year history that Missouri has brought home the Tom Davison Championship Trophy for the top overall result by a state program.

“It is such a privilege for me to be able to work with a group of talented young people like this,” said Jim Sappington, University of Missouri Extension 4-H youth development specialist and state 4-H shooting sports coordinator. “These young adults help each other overcome bad days both on and off the range. They’re not only teammates but friends, most of them for life.”

These are our future leaders, business owners, farmers, factory workers and maybe even Olympic shooters, he added. “Whatever they choose to do in life, from this point forward they’ll know that with hard work and dedication, they can accomplish almost anything.”

Major support for the Missouri 4-H Shooting Sports team was provided by Larry and Brenda Potterfield, owners and founders of MidwayUSA in Columbia, Mo. Thanks to a recent challenge gift from the Potterfields, the Missouri 4-H Foundation is partnering with the MidwayUSA Foundation to establish and begin building a Missouri 4-H Shooting Sports endowment fund. The fund will support not only the state team but also the long-term growth of 4-H youth shooting programs in Missouri.

“The 4-H Shooting Sports Program is one of the largest shooting programs in the nation,” said MidwayUSA founder and CEO Larry Potterfield. “The endowment fund through the MidwayUSA Foundation will ensure the Missouri 4-H Foundation can continue supporting young shooters for years to come.”

For a full list of results from the 4-H Shooting Sports National Championships, visit 4h.unl.edu/4hshootingsportsnationalchampionships(opens in new window).

For more information about the Missouri 4-H Shooting Sports endowment fund and ways to support it, contact Rachel Augustine at 573-884-7641 or augustinere@missouri.edu(opens in new window).

University of Missouri Extension 4-H connects the technical knowledge of Mizzou to a community of more than 190,000 youths from across Missouri learning about the sciences, leadership, citizenship and skills for life. For nearly 70 years, the Missouri 4-H Foundation has been securing and managing funds for the MU Extension 4-H Youth Development Program, providing higher education scholarships and recognizing 4-H volunteers.

Pick a peck of peppers this summer