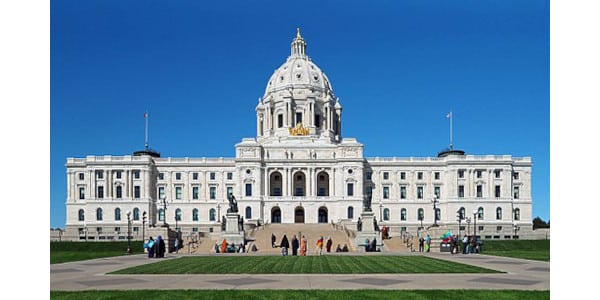 Drought relief, meat processing, broadband and the Forever Green initiative are all included in the supplemental agriculture spending package passed by legislators on the final weekend of the 2022 legislative session. (Wikimedia Commons)

ST. PAUL, Minn. — Drought relief, meat processing, broadband and the Forever Green initiative are all included in the supplemental agriculture spending package passed by legislators on the final weekend of the 2022 legislative session.

The bill passed the House late on Saturday night and the Senate on Sunday. It becomes law after it is signed by Gov. Tim Walz.

The $18.4 million drought relief portion of the bill includes:

“Today, producers in many parts of the state are coping with too much water, so the irony isn’t lost on us. That said, we know that for many livestock and specialty crop producers the drought relief package will be a meaningful shot in the arm after a devastating year,” said Minnesota Farmers Union (MFU) President Gary Wertish. “We thank Chairs Sundin, Westrom and so many others for their work on getting this relief across the finish line.”

Sen. Torrey Westrom, R-Elbow Lake, chair of the Senate Agriculture and Rural Development Finance and Policy Committee, and Rep. Mike Sundin, DFL-Esko, chair of the House Agriculture Finance and Policy Committee, introduced drought relief legislation in their respective chambers. The House passed the relief package on March 10 by a 101-33 vote. The Senate passed the legislation 66-0 on March 31. It then went to conference committee to resolve differences before being passed again over the weekend by members of both chambers.

Minnesota Farmers Union first called for a drought relief package in August. In September, Wertish joined Gov. Walz at an event announcing the drought aid package and in October, Wertish testified at a House hearing on the drought. MFU continued to advocate for drought relief throughout the legislative session.

MFU also worked on several other priority issues, including many that were included in the final $15 million supplemental agriculture spending package approved by the legislature.

“Our members laid out priorities last November at our annual convention and we’re glad to see so many of them addressed in this package,” Wertish said. “While it’s not everything we’d hoped for given the historic budget surplus, this supplemental budget will continue to support work to rebuild the state’s regional meat processing infrastructure, improve farmers’ ability to cope with changing weather patterns and strengthen the agriculture department’s ability to respond to emerging threats.”