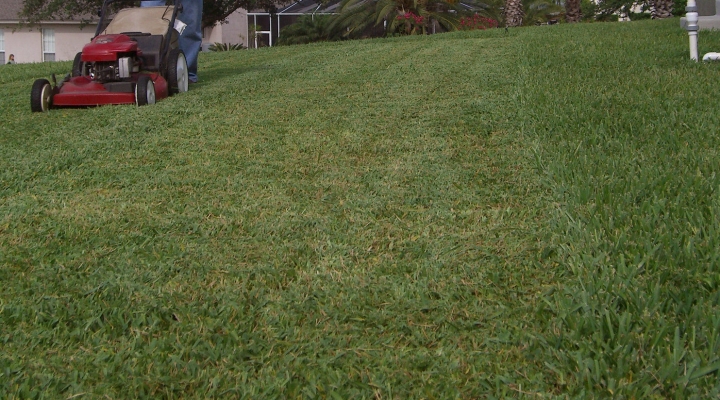 Lawns containing a mix of turf varieties are able maintain their aesthetic quality longer than single-variety lawns because they are better at dealing with disease and pests, a new University of Florida study has found. (photo by monsieur paradis, creative commons/flickr.com)

GAINESVILLE, Fla. — Lawns containing a mix of turf varieties are able maintain their aesthetic quality longer than single-variety lawns because they are better at dealing with disease and pests, a new University of Florida study has found.

These findings demonstrate one possible way to increase the sustainability of lawns, as reducing the need for pesticides lowers the potential negative environmental impact and financial cost of maintaining turf, said Adam Dale, senior author of the study and assistant professor in the UF/IFAS entomology and nematology department.

“Our study was based on the premise that increasing the genetic diversity of turfgrass within a lawn will make that lawn more resilient to stress without sacrificing the lawn aesthetic,” Dale said.

Today, most lawns are planted with just one variety of a given turfgrass species. These varieties — also called cultivars — are different versions of the same species that have been bred to have specific traits. These cultivated traits are linked to the way the plant looks or responds to different pests or stresses. These turf varieties are produced through cuttings, so individual plugs or pieces of sod are genetically identical to each other and retain the original desired traits.

While these traits give each variety its own advantages, their genetic uniformity has a downside.

For example, ‘Floratam’ is a variety of St. Augustinegrass, a grass species used in many Florida lawns and across the southern United States. ‘Floratam’ dies when infected with a virus called sugarcane mosaic virus.

“Our current understanding is that all other St. Augustinegrass cultivars can survive sugarcane mosaic virus, and current recommendations include replanting dead ‘Floratam’ with a different cultivar of St. Augustinegrass,” Dale explained. “If these lawns were initially planted as cultivar blends, then our study suggests that, if infected with the virus, these lawns would not be as vulnerable to the virus and may not need to be replanted because the other cultivars present in the blend would survive and grow in where the ‘Floratam’ died.”

In their four-year study, the researchers planted several plots with either a mix of two or four St. Augustinegrass varieties, or just one variety. Over the study period, the scientists took high resolution photos and drone images of each plot and used a special computer program to measure the turf’s color, density, uniformity and overall quality. The plots were also assessed by turfgrass professionals to determine whether they met the industry’s minimally acceptable aesthetic threshold.

Early in the study, plots looked and performed the same, regardless of the number of cultivars in a plot. However, three and four years in, plots that contained a mix of varieties maintained their density and quality, and they also looked better than the plots containing only one variety. This was especially true when the blend contained a variety that, on its own, was a poor performer, suggesting that the other varieties were able to compensate for the struggling one.

The blended plots outshined their monoculture counterparts because, as a whole, they were less affected by any single pest or disease issue, the researchers explained.

If lawns with a blend of varieties become a thing of the future, most people wouldn’t be able to tell the difference, Dale said.

“To the untrained eye, the plots in our study all look like St. Augustinegrass,” he said.

The research team is now working on developing recommendations for planting specific variety blends and testing how different blends perform in different parts of the southeastern U.S. over time.

“We are hoping that this follow-up study can help us identify regional cultivar blend recommendations,” Dale said. “We have also been collecting insects from these plots across the Southeast and are hoping to evaluate pest and beneficial insects that occur in different cultivar blends.”

Other recent work from Dale’s lab has found evidence that pests like insects and weeds are less successful in cultivar blends than single-cultivar plantings, supporting further pesticide use reductions in lawns.