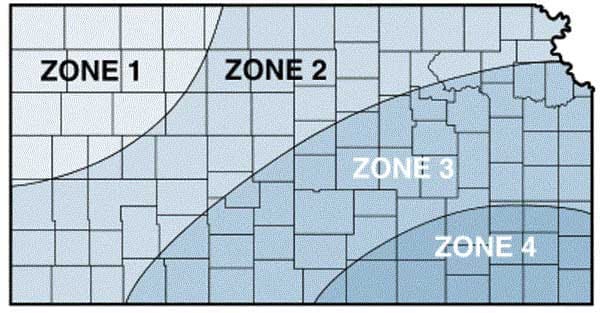 Due to the high variability in climate conditions across the state, the optimum wheat planting date varies depending on location. (Courtesy of Kansas Wheat)

MANHATTAN, Kan. — The optimal planting dates for next year’s wheat crop are now open across much of Kansas, but agronomists are cautioning producers to carefully watch and mitigate pest and disease issues as planting season gets underway.

“Choosing the right date to plant is harder than circling a date on the calendar, but Kansas farmers have the opportunity to seed yet another successful wheat crop this year,” said Aaron Harries, vice president of research and operations for Kansas Wheat. “Mother Nature always has the final influence on the wheat crop, but producers can help maximize their wheat’s potential by making informed decisions.”

Don’t Jump the Gun on Planting
Due to the high variability in climate conditions across the state, the optimum wheat planting date varies depending on location. K-State has identified the best pest management planting date (BPMP), formally known as the Hessian fly-free date.

Suggested planting dates by zone are:

In an Agronomy eUpdate on September 9, K-State agronomists recognized while earlier planted wheat yields better in some years due to weather, producers should exercise caution with planting too far ahead of the optimum planting window. Excessive fall growth and fall tillering also could use up too much soil moisture, potentially leading to more drought stress in a following dry spring. And, planting in too hot of soil can affect germination and emergence.

While producers may be tempted to take advantage of recent moisture in some locations, planting early can also lead to increased disease and insect pressure from wheat streak mosaic virus (WSMV) and related diseases, Hessian fly, armyworms and barley yellow dwarf.

“When we say avoid early planting, we’re not talking about planting outside of the window for success of your wheat crop,” said KSU Plant Pathologist Erick De Wolf. “We’re encouraging you to plant on the later side of the recommended planting dates.”

Find more information on the optimum planting window at https://eupdate.agronomy.ksu.edu/article_new/planting-wheat-too-early-can-lead-to-several-problems-460-3.

The K-State Agronomy eUpdate for September 16 suggested 2021 was the “Year of the Worm,” referring to the army cutworms that migrate from the Rocky Mountains back into Kansas each fall. This year’s larvae are particularly abundant and voracious, feeding on just about any plants, including alfalfa and emerging stands of wheat and other crops.

Fall army cutworms do not typically overwinter in Kansas, but a hard frost or freeze will be required to stop their spread, as seed treatments do not work well against this pest. As a result, producers should prepare to address both this current generation and another likely generation as the wheat crop starts to emerge before winter temperatures set in.

Stop the Spread of WSMV by Controlling Volunteer Wheat

Wheat curl mites that spread WSMV and other diseases also pose a serious threat to the Kansas wheat crop each year. The mites survive the summer on volunteer wheat and certain other grasses. As those plants die off, the wheat curl mites leave, in search of new plants to feed on.

The wheat curl mites are moved by wind and can be carried a mile or more before dying, so make sure all volunteer wheat within a mile is completely dead at least two weeks before planting.

Another good management consideration would be to select wheat varieties with resistance to the wheat streak mosaic virus and/or tolerance to the wheat curl mite, especially in the western portions of the state.

Kansas producers experienced higher than usual levels of both seed-borne diseases in 2020 and 2021, leading to yield losses. Fusarium head blight can reduce stands after planting, while common bunt can “remain silent” within a plant until grain fill, when the starch within the kernel is replaced with black spores.

Seed treatments are a highly effective tool for controlling these diseases, and K-State maintains a list of products and their effectiveness at https://bookstore.ksre.ksu.edu/pubs/mf2955.pdf.

Overall, Kansas producers have many factors to watch as they start to plant wheat this year. But, with due diligence and conscientious management, the 2022 wheat crop will be off to its best possible start.

Keep up with the latest in K-State Agronomy updates at https://eupdate.agronomy.ksu.edu/.