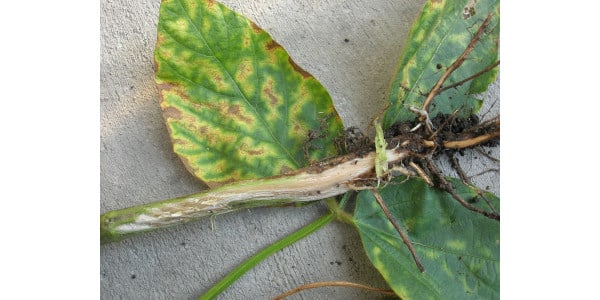 DOWNERS GROVE, Ill. — Late-season disease management is crucial to protecting corn and soybean yield potential come harvest. Although Corn Belt farmers already facing top 2021 yield robbers are past the prevention stage, the Golden Harvest agronomy team reminds them that it’s not too late to mitigate the diseases’ impact – not only for this season, but for the next as well.

Three of this season’s biggest challenges have been tar spot and Southern rust in corn, and Sudden Death Syndrome (SDS) in soybeans. Here are recommendations from Golden Harvest agronomists to manage them through the remainder of the season:

Respond to tar spot in corn

Although tar spot is relatively new to Midwestern corn fields, it has quickly become a prevalent and problematic disease.

Caused by the pathogen Phyllachora maydis, tar spot weakens a corn plant’s immune system, leaving it susceptible to more infection from other diseases.

“Most of the time, tar spot is not the only disease a corn plant is fighting off,” said Adam Mayer, Golden Harvest agronomist for southeast Minnesota and northeast Iowa. “The addition of tar spot to other common diseases in this area – such as Northern corn leaf blight, gray leaf spot or eyespot can quickly and easily downgrade crop quality.”

Tar spot presents itself as raised, black bumps on the epidermis of corn plant leaves. Once those spots are visible, Mayer cautions that this means the infection is already well on its way.

“The best control measure for tar spot is going to be prevention,” Mayer said.

As such, residue management in the off-season, crop rotation, limiting the number of corn-on-corn fields and careful hybrid selection should be top priorities for farmers in high pressure areas when planning for next season. Applying Miravis® Neo fungicide is also a good option for preventive control of tar spot.

Southern rust pressure has been above average across Midwest corn fields during the 2021 growing season, including in the southwest Illinois region supported by Golden Harvest agronomist Nate Prater.

“We usually see Southern rust at a later stage in the season, but this year, it started affecting crops right after pollination,” Prater said. “That means these plants were dealing with the disease during kernel fill, so we’re likely going to see some yield effects.”

Prater described a Southern rust infection for a corn plant as equivalent to trying to run a marathon with your nose pinched shut and your oxygen cut off. Southern rust causes pustules on the top of plant leaves, preventing sunlight from being absorbed and limiting the amount of energy the corn plant can produce. As a result, the plant will rob that energy from other places, whether that be from the stalk, the kernel size or the kernel depth.

To mitigate the effects of a Southern rust infection at this point in the season, Prater recommends considering an earlier harvest date.

“You may have to change your harvest strategy a little bit,” Prater said. “Instead of waiting until the middle to end of October, it may be beneficial to start harvesting earlier in the fields where you’re seeing lodging and late-season standability issues due to Southern rust infection.”

To get ahead of the issue next season, Prater suggests selecting hybrids with strong tolerance to Southern rust, planting early and applying a quality fungicide such as Trivapro® at the R1 stage, shortly after pollination.

SDS is a chief cause for concern for soybean farmers year after year. This yield-limiting disease starts as a root rot early in the year, before eventually leading to premature death of the soybean plant.

“Over the season, the soybean roots will slowly build up toxins from the soilborne pathogen Fusarium virguliforme,” said Ryan Dunsbergen, Golden Harvest agronomist for southeast Iowa and northeast Missouri. “Then in the case of a rain event, moisture comes into the soybean plant and flushes those toxins through the entire plant.”

Although it is too late in the season to control a current SDS infection, Dunsbergen said that it is still important to scout fields now to understand what types of pressure are present.

“Sometimes SDS does not get expressed in soybean leaves, so it’s important to get out and dig roots to understand your current SDS pressure,” he said. “That will help you make the right management decisions for next year.”

When preparing for next season, Dunsbergen recommends choosing varieties with tolerance to SDS, considering a strong seed treatment such as Saltro®, and improving drainage and reducing compaction in fields.

The Golden Harvest portfolio is available from Golden Harvest Seed Advisors, who combine high-yielding seed options with local agronomic knowledge and deliver a Service 365 year-round commitment to doing whatever it takes to yield results for farmers.

Golden Harvest Seeds has been rooted in genetics, agronomy and service since 1973, offering in-depth seeds expertise combined with the local agronomic know-how of an independent Seed Advisor to maximize yield potential on each field. Today, every Golden Harvest hybrid and variety is bred with the individual needs of hardworking farmers in mind. Find more information at GoldenHarvestSeeds.com. Follow us on Twitter at www.twitter.com/GldnHarvest and like us on Facebook at www.facebook.com/GldnHarvest.

The content of this release is for information purposes only. This release is not, and should not be construed as, an offer to sell or issue or the solicitation of an offer to buy any securities or other property interests.

The amazing chemistry of fall colors