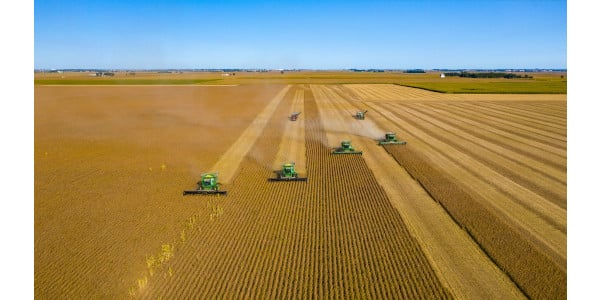 According to the United States Department of Agriculture, Missouri’s soybean harvest has averaged approximately 50 bushels per acre in each of the last two seasons. (James Baltz/Unsplash)

JEFFERSON CITY, Mo. – Missouri Soybeans is proud to recognize the 2021 Missouri Soybean Association (MSA) Yield Contest winners, many of whom submitted results in the triple digits. Each year, growers from across the state submit their best numbers for the annual competition to showcase the power of Missouri’s soybean industry.

This year’s winner for non-irrigated beans went to Carl Landewee of Landewee Farms in Chaffee, Mo. He raised 104.9 bushels per acre of soybeans in Cape Girardeau County with Asgrow AG38XF1 seed.

In the irrigated category, first place went to Joseph Landewee also of Landewee Farms. He produced 104.3 bushels per acre of soybeans with Asgrow AG38XF1 seed.

The Landewee family has been involved in the MSA contest for several years and were past winners with robust yields. This year, the Landewee’s doubled Missouri’s statewide soybean average.

According to the United States Department of Agriculture, Missouri’s soybean harvest has averaged approximately 50 bushels per acre in each of the last two seasons.

“Our annual soybean yield contest is an opportunity to amplify the hard work our growers are putting in at each corner of the state,” said Ronnie Russell, MSA president and farmer from Richmond, Missouri. “Our organization enjoys the opportunity to spotlight these farmers and extend a reward for their stewardship and steadfastness to production agriculture. It’s always impressive to see the yields from various parts of Missouri and show our counterparts what the Show-Me state is made of.”

Winners will be recognized at district soybean meetings this month and next, with statewide winners being honored during the MSA annual meeting in Jefferson City taking place Jan. 24.

Details from MSA’s 2021 Yield Contest will be posted online at mosoy.org and announced in further detail in the Missouri Soybean Farmer this spring.

Heroes to Hives opens enrollment for 2022