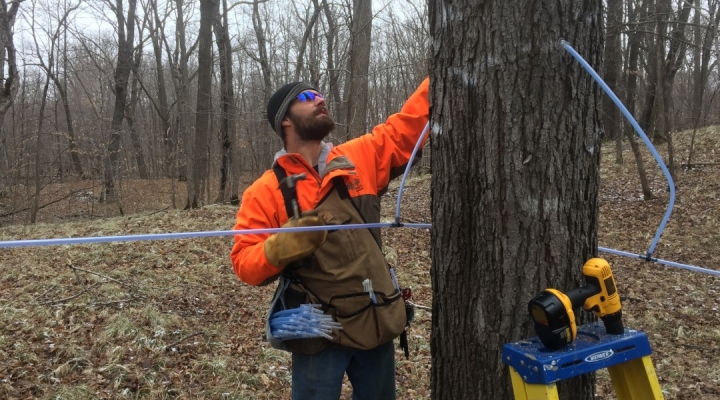 At one end of the spectrum, sugaring can be a most satisfying back-yard family hobby. At the other end, sugaring is a high-tech agribusiness, forest management, and food marketing enterprise that requires substantial financial investment and sound business practices. Minnesota’s maple syrup industry has producers at both ends of that spectrum and everywhere in between. (Stu Peterson)

At one end of the spectrum, sugaring can be a most satisfying back-yard family hobby. At the other end, sugaring is a high-tech agribusiness, forest management, and food marketing enterprise that requires substantial financial investment and sound business practices.

Minnesota’s maple syrup industry has producers at both ends of that spectrum and everywhere in between. A common growth path is the hobby producer who starts with just a few taps, catches the love-of-maple bug, evolves into a hobby-out-of-control and then a full-blown commercial operation. Maple legend has it that hand injuries suffered by beginners while tapping allow fresh maple sap to enter the wound and then into their veins.

WARNING: Maple in the veins can take over a person’s life.

I have never really come across a satisfactory definition of a “commercial” maple syrup producer versus a “hobbyist.” For my purposes, a hobbyist transitions to commercial when they produce more syrup than needed for personal consumption and begin selling to the public. It is at that point that the producer needs to be aware of licensing requirements, food safety rules, product labeling requirements and liability insurance just to name a few. Most of all, selling to the public requires focus on the quality of the syrup including acceptable flavor, proper bottling, accurate syrup density and filtering for product clarity. 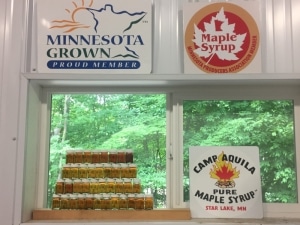 The popularity of “back-yard sugarin” has exploded in recent years, especially since Covid has motivated people to explore new outdoor activities. It takes only a small investment for a beginning hobbyist to make that first gallon of maple syrup. A little research, access to a few maple trees, a couple hundred dollars on spouts, bags or buckets, a cook pan over a fire and the beginner is on their way. Add a few hours on snowshoes tapping with a drill and a light hammer, and a few more hours collecting and boiling sap every few days for a month, and voila … you have your own maple syrup and a springtime experience never to be forgotten.

On the other hand, a viable commercial operation requires an investment of many tens of thousands of dollars for a food-grade processing building, an efficient sap collection system, reverse osmosis and a sophisticated evaporator for boiling sap, filtration, bottling and monitoring equipment, and everything else required to put a quality maple product into the marketplace. This all comes after securing access to a stand of mature maple trees, either leased or owned.

The Minnesota Department of Agriculture handles licensing. Maple syrup producers are allowed sell to the public without a license under certain conditions. One condition is a licensing exclusion called product of the farm which says that foods grown on your land (or land that you are renting) that contain no added ingredients from off that land can be sold without a license. Syrup being sold to the public needs to be produced within accepted food grade standards and practices, regardless of license status.

Those that are licensed are typically gathering sap from other farms and or adding additional ingredients (berry flavor/concentrate, butter, etc.). Some operations may be considered retail if the majority of their sales are sold direct to the consumer; the firm can still wholesale product, but the license is based on their predominant mode of business 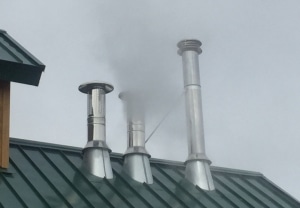 How big is Minnesota’s maple syrup industry and how does it stack up among the other maple producing states and Canadian provinces? Keep in mind that the world’s supply of maple syrup is produced almost exclusively in the U.S. and Canada, roughly in a large oval shaped region surrounding the Great Lakes and the St. Lawrence Seaway to the Atlantic. Minnesota represents the far western edge of commercial maple syrup production, while the province of Nova Scotia is the eastern edge. Although it varies from year to year, Canada produces at least 75-80 % of world maple syrup, and the province of Quebec alone produces over two thirds of world production.

In a few words, Minnesota is barely a drop in the bucket in terms of overall production! The largest producing states in the U.S. include Vermont, New York, Maine and Wisconsin. There are individualmaple operations in both Vermont and Maine that tap more maples and produce more syrup than the entire estimates for Minnesota.  Minnesota is truly syruping on the edge as our natural mixed hardwood forests transition into the prairies of western Minnesota.

One great frustration is the lack of reliable data on maple production in Minnesota.  Neither the USDA nor the Minnesota  Dept of Agriculture collect or report reliable data. The USDA conservatively estimates that Vermont (the largest U.S. producing state) produced 1.5 million gallons of syrup in 2021 and Canadian production totaled 11.3 million gallons according to Statista. There are 82 maple syrup producers in the Minnesota Grown member directory.

The best source for Minnesota statistics may be the Minnesota Maple Syrup Producers Association (www.mnmaple.org), but even its information is incomplete. The MMSPA surveys its 125+ members every few years but gathers no information on non-members. I recently asked a selected group of respected Minnesota producers to estimate Minnesota producers by number of trees tapped.  The consensus was Minnesota most likely has 20-40 producers at over 1,000 taps, including only 3 over 10,000.  At the lower end, Minnesota has a very large number of small producers including many true hobbyists and small commercial producers from 5 taps to 1,000 taps. 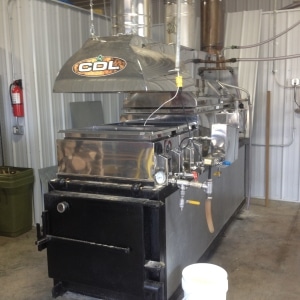 Though small in terms of the total industry production, Minnesota has a well-deserved reputation for producing high quality flavorful maple syrup.  Members of the Minnesota Maple Syrup Producers Association have repeatedly placed well in international competitions sponsored by the North American Maple Syrup Council.  It is especially rewarding to see “drop in the bucket” Minnesota producers compete effectively against the big players from the east and be recognized with blue ribbons and grand champions for producing some of the highest quality most flavorful syrup in the industry.

Minnesota producers have a special niche selling their locally produced maple products and promoting their products under the “Minnesota Grown” program (Syrup | Minnesota Grown).  In addition to maple syrup producers, the industry in Minnesota also includes other important players including packers, equipment suppliers and a state trade association.  Maple syrup packers typically do not produce their own maple syrup but purchase bulk syrup on the open market. Packers blend, bottle, and distribute on a regional and national basis.  Packers provide an important market for producers, especially larger ones, who cannot directly sell all they produce and for smaller producers who choose not to sell retail.

The Minnesota Maple Syrup Producers Association (www.mnmaple.org) is the state’s  go-to organization for hobbyists and commercial producers alike, as well as equipment suppliers, educators and others involved in the industry. Its mission is to promote the production of high-quality maple syrup through education and information exchange. It is a fun group of people who generously share maple information and ideas. For $25 (the annual single membership fee) new producers can learn the basics and get reliable answers to their questions.   Veteran producers can keep up with new and changing technology, maple research projects and industry conditions.

The Association holds in-person membership meetings on a rotating basis around the state.  Speakers, workshops, panel discussions, equipment demonstrations and tours of member sugaring operations are all offered to share and exchange information and answer questions.  MMSPA publishes a quarterly newsletter and members also receive a copy of the Maple Syrup Digest published by the North American Maple Syrup Council.

So, back to the original question. Is maple sugaring a boutique seasonal hobby or a commercial year-round agribusiness enterprise of consequence?

The answer, me thinks, is both.

Stu Peterson tapped his first sugar maple in 2000, cooking sap on a flat pan over cinder blocks in a neighbor’s back yard.  Along the way maple got in his veins and the hobby raged out of control. Within four years he and wife Corinne had expanded from 50 taps to 400, formed Camp Aquila Pure Maple Syrup, LLC, built a dedicated sugar house, purchased a commercial evaporator and other needed equipment, and became both licensed by the MDA and Certified USDA Organic by the MCIA.   The Petersons are now preparing for their 23rd season.  Today Camp Aquila is a small commercial syrup operation, tapping 1300 sugar maples, producing award winning pure maple syrup.  He is a member of the board and past president of the Minnesota Maple Syrup Producers Association and currently serves on the boards of the North American Maple Syrup Council and the International Maple Syrup Institute.