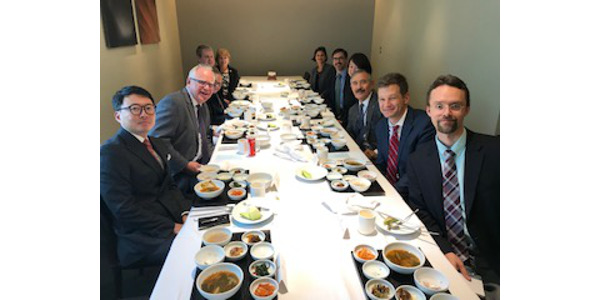 Governor Walz first traveled to Tokyo, Japan from September 7 – 10 to attend the 51st Midwest U.S. Japan Association Conference with other Midwest governors at the invitation of Shinsuke J. Sugiyama, Japanese Ambassador to the United States. On September 11, he made a one-day stop in Seoul, South Korea before returning to Minnesota on the newly-created Delta Seoul-MSP direct flight.

“I’m working to keep Minnesota competitive in a global economy,” said Governor Walz. “That’s why I traveled to Japan and South Korea to promote Minnesota businesses and expand our economic partnerships. Minnesota grows some of the best crops in the world and our businesses offer innovation and a world-class workforce. I was proud to build on our existing relationships and reputation and make sure Minnesota is on the map years into the future.”

Governor Walz travelled to Japan and South Korea with Department of Employment and Economic Development (DEED) Commissioner Steve Grove and representatives from the Minnesota Trade Office (MTO) at DEED, as well as representatives the City of Faribault, Rice County, and Destination Medical Center.

“Japan and South Korea are critical trade partners to Minnesota businesses of all sizes,” said Commissioner Grove. “This trip gave us the opportunity to strengthen Minnesota’s relationship with these two countries even as we continue to experience international trade uncertainty at the federal level.”

Minnesota is home to more than 35 Japanese-based companies, located in every corner of the state and across sectors. Minnesota also has a long history of engagement with South Korea. Governor Walz met with companies including Hitachi, Toyota, Medtronic Japan, Kurita Water Industries, KITO Corporation, Toppan Merrill, Sumitomo Chemical Co, Ltd, Sawai Pharmaceutical, Doosan Bobcat, and CJ CheilJedang. The trip successfully laid the groundwork for future opportunities of economic partnership between both countries and Minnesota.

“It was a great opportunity for us to hear from Governor Walz about the direction of Minnesota,” said Yoshio Kito, President and CEO of the KITO Corporation. “Kito would make our best effort to contribute to the economy of the State and also to the prosperity of the community of Winona through our business development.”

“This was the first time we’ve hosted a Minnesota Governor and we were honored hearing Minnesota’s appreciation for our work there,” said Masakazu Tokura, Chairman of the Board of Sumitomo Chemical Company Limited. “Our subsidiary, MGK, has been operating in Minnesota for over 100 years and we look forward to the business’ continued work in the state.”

“We were delighted to welcome Governor Walz and his team to Toppan and very excited to hear about all that Minnesota has to offer to a business like ours as we expand operations there,” said Takao Ikeda, Executive Officer of the Corporate Planning Division & Global Business Center at Toppan Merrill.

“Thank you for visiting Kurita’s head office during the first trip to Japan as Governor,” said Yasuo Suzuki, Director and Executive General Manager of Global Business Division. “We will do our best for the expansion in US from Minnesota based on working together with Minnesota people.”

This was Governor Walz’s first international trip since taking office in January 2019.