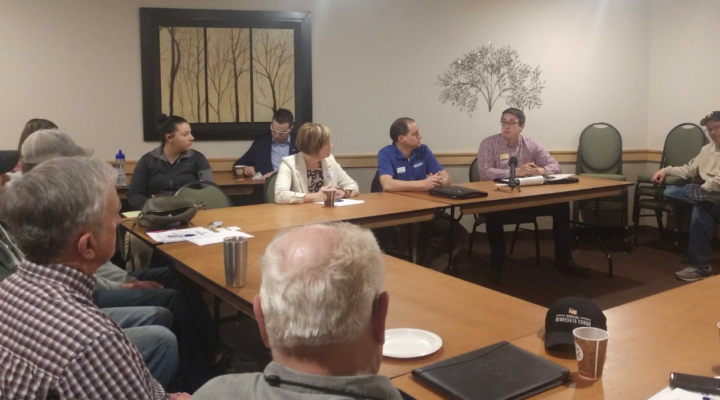 Leaders within the Minnesota agricultural industry met for a roundtable discussion on USMCA.

HAWLEY, Minn. — Leaders within the Minnesota agricultural industry met on Tuesday, May 21st in Hawley, MN for a roundtable discussion focused on the importance of the US-Mexico-Canada Agreement (USMCA) and its potential impact on the local, state, and national economy.

In attendance at the roundtable were local farmers and producers, in addition to representatives from American Agri-women, the Minnesota Soybean Research & Promotion Council, Minnesota Soybean Growers Association, Minnesota Corn Council, Pioneer Seed, AgCounty Farm Credit Services, and West Central Ag Services. Participants shared their perspective on the benefits of international trade for the region and emphasized the importance of the swift passage of USMCA for the future of the state’s agriculture industry.

Agricultural exports from Minnesota to Canada and Mexico generate over $1 billion every year and support over 57,000 jobs. However, in recent years farm income has fallen 8% and Minnesota farmers and ranchers are feeling the effects. Concerns were also raised by the roundtable participants regarding the future of Main Street, with specific examples given by financial lenders, grain buyers, and local farmers.

The effects of trade uncertainty for Minnesota farmers is being felt at every level as young producers at the event commented on the current state of the agriculture economy and its impact on their decision in officially joining their family’s farming business. Many commented that they were wary of taking that leap due to the uncertainty in market prices and access. This concern for the future was also shared by experts in the grain business who revealed that if prices continue to drop, even a record crop of soybeans or corn won’t be enough for farmers to recoup their expenses.

The roundtable concluded that passage of USMCA would relieve the strain Minnesota farmers are currently experiencing, provide certainty for the future, and help reverse the ongoing financial downturn in rural America.

Bill Zurn, a farmer leader from the MN Corn Council, Minnesota Soybean Research & Promotion Council Board Member, and Soybean Checkoff Leader, commented, “USMCA is very important for Minnesota farmers, not only for soybeans and wheat but for corn and our sugar industry as well. We have great neighbors and trade partners to the north and south, but right now the whole US agricultural community is hurting. Passage of USMCA would help us move forward in the right direction.”

The message from this group of Minnesota ag leaders was clear, swift ratification of USMCA through Congress is vital to the future of American agriculture. A vote for USMCA is a vote of support for rural America.

Delayed and prevented planting webinar on May 24

May 22 is Illinois Pork Day at the Capitol