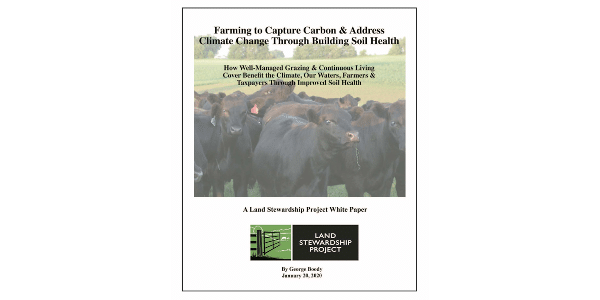 MINNEAPOLIS, Minn. — Farming systems that build healthy soil by keeping the land covered in vegetation year-round have the potential to lower the net greenhouse gas emissions produced by Minnesota’s crops and livestock by as much as 30% while cutting nitrogen pollution by up to 45%, according to a white paper released today by the Land Stewardship Project (LSP). “Farming to Capture Carbon & Address Climate Change Through Building Soil Health” (https://landstewardshipproject.org/carbonfarming ), which is based on an analysis of the scientific literature related to soil health and climate change, as well as interviews with Minnesota farmers, makes several policy recommendations for the upcoming session of the Minnesota Legislature and beyond, including increased funding for initiatives that promote and support soil-building farming systems. The paper also makes federal policy recommendations.

“Agriculture is a major contributor to greenhouse gas emissions, but it is also key to helping us mitigate climate change while making us resilient in the face of its impacts, both here in Minnesota and across the country,” said LSP’s George Boody, who authored the paper as a part of LSP’s Bridge to Soil Health initiative. “In fact, improving soil health in ways that lead to long-term storage of carbon and storing carbon in vegetation are currently the most viable ways on land to remove greenhouse gases from the atmosphere.”

Humans must act to reduce greenhouse gas emissions by at least 25% by 2030 to limit global average temperature increases to less than 2 degrees centigrade. Agriculture is currently a major contributor to emissions that impact climate change — accounting for 9% and 24% of U.S. and Minnesota greenhouse gas emissions, respectively. The good news is that during the past decade, scientific advances as well as the on-the-ground experiences of crop and livestock farmers have shown that soil organic matter can be increased in a matter of a few years. Because 58% of organic matter is carbon, the more organic matter in the soil, the greater its potential to store greenhouse gases.

Building carbon-rich soil results from the presence of a diversity of plants (and their roots) on the land via “continuous living cover” and reduced tillage. Examples of continuous living cover systems include planting cover crops as part of the corn-soybean system and longer rotations such as those used in organic farming systems.

The paper documents how managed rotational grazing of cattle and other ruminants on perennial grass pastures, as well as on annual cover crops, can build the soil’s ability to store carbon. Subdividing pastures with fencing, moving herds frequently and allowing time for vegetation to regrow before being grazed again is accomplished through managed rotational grazing systems.

Some farmers in Minnesota and elsewhere have been able to more than double their organic matter levels in as little as a decade by adopting continuous living cover, reduced tillage and managed rotational grazing.

As much as 9% of U.S. greenhouse gas emissions could potentially be offset by shifting 25% of ruminants to well-managed grazing and 25% of cropland to a combination of perennial cover, diverse rotations, and cover crops. Based on similar adoption rates, the LSP white paper shows a scenario that would potentially lower Minnesota crop and livestock net greenhouse gas emissions by 30%, compared to 2016 agricultural emissions totals.

The analysis also concludes that building soil health could help Minnesota deal with another major environmental problem: water pollution. Integrating continuous living cover and managed rotational grazing into farming systems could help reduce agricultural nitrogen pollution by up to 45% in surface waters, while capturing rainfall and storing more water, according to the paper.

Kaleb Anderson, who raises crops and livestock in Goodhue County in southeastern Minnesota, said during the past few years he has seen firsthand the benefits of rotationally grazing his beef herd on cover crops and perennial pastures to improve the resiliency of his soils, which had previously suffered from erosion, compaction and excessive runoff.

“When rain falls on my fields it soaks in,” he said. “Improved soil health is an investment that pays off for my farm as well as my community.”

However, the paper finds that government policy and markets too often promote a type of agriculture focused on annual monocultures and the confinement of livestock. Over the decades, farmers have seen, and science has documented, a reduction in soil health and the loss of soil carbon to the atmosphere. Through increased continuous living cover research such as what is being done by the University of Minnesota’s Forever Green Initiative, as well as significant modifications to state and federal agriculture programs and greater market incentives for livestock products produced on grass, Minnesota could become a leader in soil-smart farming, concludes the paper.

“In the face of the farm crisis, weather extremes from climate change, and impairments of streams, lakes and drinking water, we have a unique opportunity and responsibility to invest in keeping small- and mid-sized farmers on the land in a way that builds soil health and improves water quality,” said Boody, who is LSP’s Science and Special Projects lead staffer.

“It is a critical time for the state to invest in giving farmers the tools and incentives to be stewards of our soil and water while addressing climate change,” she said. “More carbon in our soil can help us deal with the twin crises farmers face today: climate change and financial stress.”