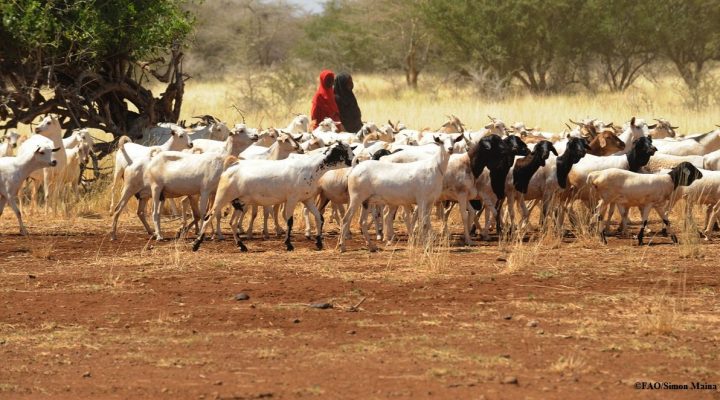 Farmers in the Horn of Africa need urgent support to recover from consecutive lost harvests and to keep their livestock healthy and productive. (Courtesy Photo)

ADDIS ABABA — With as little as one-quarter of expected rainfall received, widespread drought conditions in the Horn of Africa have intensified since the failure of the October-December rains, FAO said today.

Areas of greatest concern cover much of Somalia, north-east and coastal Kenya, south-east of Ethiopia as well as the Afar region still to recover from El Nino induced drought of 2015/16; as well as South Sudan which faces a serious food crisis due to protracted insecurity.

Currently, close to 12 million people across Somalia,Ethiopia and Kenya are in need of food assistance, as families face limited access to food and income, together with rising debt, low cereal and seed stocks, and low milk and meat production. A pre-famine alert has been issued for Somalia and an immediate and at scale humanitarian response is highly required.

Acute food shortages and malnutrition also remain a major concern in parts of Uganda’s Karamoja region.FAO warns that if response is not immediate and sufficient, the risks are massive and the costs high.

“The magnitude of the situation calls for scaled up action and coordination at national and regional levels. This is, above all, a livelihoods and humanitarian emergency – and the time to act is now”, said FAO Deputy Director-General, Climate and Natural Resources, Maria Helena Semedo. “We cannot wait for a disaster like the famine in 2011”.

Semedo was speaking on behalf of the FAO Director-General at a High-Level Panel on Humanitarian Situation in the Horn of Africa chaired by the United Nations Secretary-General, António Guterres, on the sidelines of the 28th AU Summit (Addis-Ababa).

“The drought situation in the Region is extremely worrying, primarily in almost all of Somalia but also across Southern and South-eastern Ethiopia, and northern Kenya. As a consequence, with the next rains at least eight weeks away and the next main harvest not until July, millions are at risk of food insecurity across the region”, Semedo said.

For his part Guterres said: “We must express total solidarity with the people of Ethiopia on the looming drought, as a matter of justice.” The UN Secretary-General called for a stronger commitment to work together.

“Insecurity and economic shocks affect the most vulnerable people”, warned Bukar Tijani, FAO Assistant Director-General and Regional Representative for Africa. “The situation is rapidly deteriorating and the number of people in need of livelihood and humanitarian emergency assistance is likely to increase as the dry and lean season continue with significant negative impact on livelihoods and household assets as well as on the food security and nutrition of affected rural communities”, he added.

“FAO’s partnership to build resilience to shocks and crises in the Horn of Africa is critical and will increase,” assured Tijani.

Recently, FAO and IGAD agreed on some key steps to enhance collaboration in mitigating the severe drought currently affecting the countries in the Horn of Africa region and strengthening food security and resilience analysis.

The two organizations emphasized the importance of enhancing the role of the Food Security and Nutrition Working Group (FSNWG), The Integrated Phase Classification (IPC) and the Resilience Analysis Unit to enhance the effectiveness of the Early warning-Early action and resilience investments.

FAO calls for joint priorities to increase and include enhanced coordination, increased and systematic engagement of member States and effective response to member States’ identified needs, as well as strengthened resource mobilization efforts.