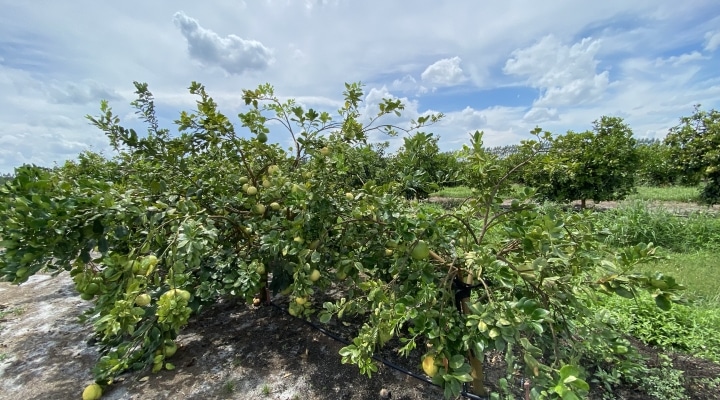 Researchers and citrus growers await the first harvest of data on yield and fruit quality from a major citrus trial on Florida’s east coast. The results may reveal which of thousands of trees can tolerate citrus greening, the disease that has devastated the state’s citrus industry. (UF/IFAS photo)

FORT PIERCE, Fla. — Researchers and citrus growers await the first harvest of data on yield and fruit quality from a major citrus trial on Florida’s east coast. The results may reveal which of thousands of trees can tolerate citrus greening, the disease that has devastated the state’s citrus industry.

“More than 5,500 trees in an experimental grove we call the ‘Millennium Block’ hold hope for the state’s citrus growers,” said Ronald D. Cave, director of the University of Florida/IFAS Indian River Research and Education Center (IRREC) in Fort Pierce.

Conclusive data will come in early 2023. Cave believes the scientific findings may help the Indian River District citrus industry get back on its feet.

Cave said the 20-acre grove, established in 2019, features 154 new citrus scion-rootstock combinations — some of which will produce market-ready fruit. The research grove was started in response to a steep decline in statewide citrus production. In its heyday, nearly 1 million Florida acres were citrus groves.

Citrus greening appeared in Florida groves in the mid-2000s. After a tree contracts the disease, it declines — and fruit production may fall to unsustainable levels. Growers and researchers agree that the most effective way to restore wholesome fruit production is to identify rootstock and scion-grafted combinations that tolerate the disease.

Leading the rootstock research are Cave, who’s the principal investigator; Pete Spyke, a longtime citrus grower and William Castle, a member of the IRREC Advisory Committee and a UF/IFAS professor emeritus at the Citrus Research and Education Center. Castle serves as a key consultant.

“In one trial, we took the worst of the grapefruit, the most susceptible to citrus greening, and matched it with different rootstocks,” said Spyke. “We didn’t pick the grapefruit that tolerates the disease because we are looking for differences, not absolute performance.”

Cave said the researchers chose navel orange to act as an indicator scion for rootstock effects on orange varieties because it expresses rootstock differences more than standard juice oranges. A rootstock that imparts disease tolerance, climatic stability and high brix fruit in navels — which struggle with fruit production and brix issues — will automatically outperform other rootstocks for round oranges grown for processing. The variety ‘UF950’ mandarin was also selected as an indicator scion because it has major issues with fruit production.

“If the research shows high yields with UF950, it could become the go-to choice for mandarin varieties in general, providing a similar role as Cleopatra Mandarin in the past,” said Spyke.

In a fourth trial, the UF/IFAS researchers evaluated multiple grapefruit scions, the parts that’s aboveground. They  graft the scions onto the rootstocks or citrus tree roots.

Rootstocks employed in that grapefruit variety trial are ‘Standard Sour Orange,’ ‘X-639’ and ‘US942.’ There are 18 different grapefruit and grapefruit hybrids on these three rootstocks in the experimental trial.

Cave said the researchers will reach a milestone later. The first fruit data and tree growth analyses from the last four years will begin the process of choosing rootstocks that will grow trees that produce high yields of marketable fruit.

“We take leaf samples from each tree to run citrus greening diagnostics. And we also take notes on what we see visually,” said James. “We do analyses to correlate the two and see the accuracy between visual scans and actual data.”

Many trees appear tolerant to different disease pressures. Still, Cave, Spyke, Castle and James agree that decisions cannot be made based on visual observations or data collected before the first fruit harvest. This fall will bring the first harvest.

“Some grapefruit hybrids—like the Pummelette—look like good replacements for grapefruit if we do not solve the citrus greening problem,” said James.

Data collection includes phenological development—or the study of seasonal, cyclical, and natural tree changes. Other data are leaf nutrition profiles, soil chemistry, and incidence of disease and pests. Soon, drones will be employed to track each tree’s height and trunk diameter.

“Bottom line – we see some rootstock combinations in all four trials that appear to be growing normally and producing good crops of large, high quality, delicious fruit,” Spyke said. “Trust in the data from the Millennium Block will require more than one crop.”

Continued funding for the planting will be important in the future, and the experimental design will provide reliable data, Spyke said.

Spyke said Indian River District grapefruit is a high-value fresh crop exported internationally. There is a strong interest among legacy growers to continue to produce grapefruit locally. If the Millennium Block shows data to support a grapefruit-like variety tolerant to citrus greening, growers may be interested in that option.

“The University of Florida/IFAS took a bold step to establish the Millennium Block,” Cave said. “And the steps taken to continue the research will make a difference for all growers in Florida.”