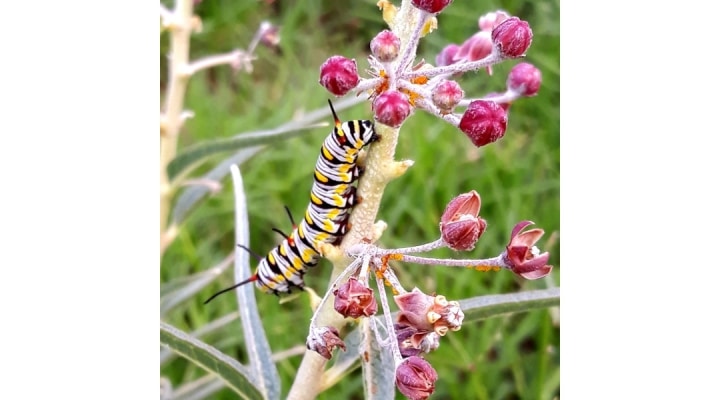 ITHACA, N.Y. — Researchers have identified a species of milkweed that holds promise for planting on roadsides to improve conservation habitat for migrating monarch butterflies.

The study, “Ecology of Asclepias Brachystephana: A Plant for Roadside and Right-of-Way Management,” published online Feb. 1 in the journal Native Plants, describes how researchers surveyed the poorly studied bract milkweed (Asclepias brachystephana) to document where it grows, which organisms make use of the plant, seed production, and concentrations of milkweed toxins (called cardenolides). The findings verify that the species is a good candidate for planting within roadside or rights-of-way conservation projects.

Entomologists have been alarmed by a global drop in insect numbers. Migrating monarchs have not been spared, with loss of habitat and host plants –such as milkweeds for larvae to grow along migratory routes – as potential reasons for the drop in monarch numbers.

As a result, some management projects are replacing invasive grasses previously planted along roadsides and pipelines with native species that feed and provide habitat to insects.

“With over 130 species of milkweed in North America, we are just beginning to understand the biology of the majority of species, which are typically rare or more restricted in their range than the common milkweed [A. syriaca], which dominates the Northeast,” said Anurag Agrawal, the James A. Perkins Professor of Environmental Studies in the Department of Ecology and Evolutionary Biology in the College of Agriculture and Life Sciences, and the paper’s senior author.

“We needed to know the natural ranges of these plants so that we can incorporate them into conservation projects,” said first author Shaun McCoshum, a postdoctoral researcher in the Department of Ecology and Evolutionary Biology.

For the study, McCoshum drove and walked a total of 3,000 miles along pipelines and roadsides within the Chihuahuan Desert and adjoining ecoregions to survey and locate bract milkweed populations. He found that the milkweed grows in large swaths of the southwest, including parts of Texas, New Mexico and Arizona, and most of Mexico, areas where monarch and queen butterflies (a sister species to monarchs) live and migrate.

McCoshum also collected data on herbivores he found feeding on the plants, including oleander aphids, queen butterflies, milkweed tussock moths and crimson-bodied lichen moths. Some of the identifications came from iNaturalist, a citizen science project that allows the public to collect and record species data. Due to the timing of the surveys, McCoshum did not find monarchs on the plants, but Agrawal has done studies to show that monarchs feed and develop successfully on bract milkweed.

The population of monarchs that migrate north each year overwinter in Mexico and have their first generation in Texas, Oklahoma and Kansas, before they expand northward. Called a successive brood migration, each successive generation moves to a new range over the year, until they make their way all the way to Canada and northern U.S. states. The last generation can live up to nine months and migrates back to overwintering sites in Mexico, and it is during this return fall migration that they have been known to rear young on milkweed in the southwest.

Milkweed’s toxins can cause illness or even kill livestock so ranchers often remove it from their lands and oppose planting it near their fields. The researchers found that bract milkweed contains high levels of toxins in the wild, yet it only spreads into disturbed and mowed areas.

“During the surveys, I kept finding it on roadsides and the population stretched along disturbed areas, but they did not at any point ever cross fence lines into undisturbed or less managed areas,” McCoshum said. “That’s an exciting aspect of this milkweed for roadside restoration purposes, especially for concerned landowners.”

Seed companies may now use this information to produce seeds targeted for areas within the plant’s range to establish it for conservation purposes and to prevent soil erosion.

The study was supported by the National Science Foundation.