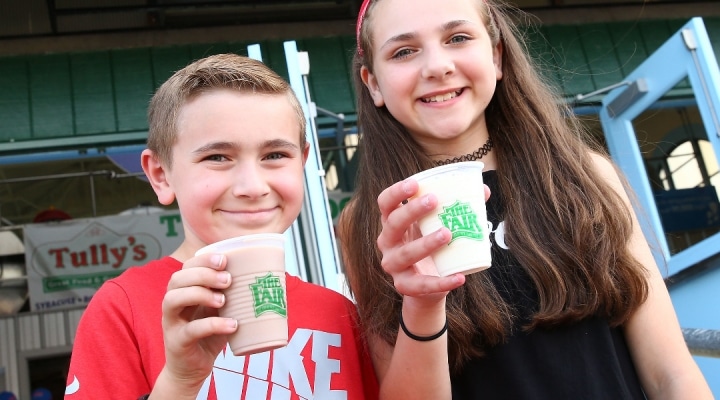 SYRACUSE, N.Y. — Just when you thought the Milk Bar couldn’t get any better, another flavor is on tap for several special days of the 2021 Great New York State Fair. Perfectly chilled strawberry milk will be served in the Dairy Products Building during the second and third weekends of the Fair, as well as Labor Day.

“Nothing beats a cold cup of milk when the Fair heats up. A family of four can hand over just $1 and walk away with four delicious drinks,” said Fair Director Troy Waffner. “Fairgoers line up year after year, so we’re very excited to see how they’ll react when strawberry milk becomes an option again.”

Longtime fairgoers may remember enjoying strawberry milk at the Fair many years ago. The decision to bring back the treat was inspired by the overwhelming popularity of chocolate milk. On a normal busy day, the Milk Bar will sell 120 gallons per hour of chocolate milk.

“This is a big change and we’re ready for it. On one hand, this will remind some visitors of their childhoods and the past, but this could also be a defining moment for the future,” said Milk Bar operator Wahid Akl. “If a different flavor does well, I may look into offering more options. We could try mocha, mint, and maybe cookies-n-cream milk. First, we need to find out if strawberry is popular.”

Two flavors can be sold each day at the Milk Bar because the refrigerated holding tanks have two pipelines to the dispensers where milk is served. Chocolate and strawberry milk will be sold from Friday, August 27 through Sunday, August 29 and again from Friday, September 3 through Monday, September 6. Otherwise, white and chocolate milk will be sold.

The milk at the Milk Bar is being provided by Upstate Niagara Cooperative thanks to the company’s long-standing partnership with the NYS Department of Agriculture and Markets and its commitment to support the New York dairy industry.

Seven token machines are set up around the Dairy Products Building to help keep the lines moving. Regular customers may notice the design on the tokens has changed each year since 2017. Each token costs 25-cents and will buy one cup of milk. More than 30,000 cups are sold at the Milk Bar daily, on average. The milk is stored at temperatures between 35 and 36 degrees to deliver the perfect thirst-quenching drink.

The Milk Bar helps to shine a spotlight on New York’s dairy industry, which is New York State’s largest agricultural sector. The State has nearly 3,600 dairy farms that produce more than 15 billion pounds of milk annually. New York dairy farms of all sizes are making significant contributions to the state’s economy. The State ranks fourth in milk production, and number one in the production of cream cheese and cottage cheese.

Founded in 1841, the Great New York State Fair is America’s third largest state fair. The Fair showcases the best of New York agriculture, provides top-quality entertainment, and is a key piece of the CNY Rising strategy of growing the Central New York economy through tourism. Fair attendance is up more than 46% since the beginning of more than $120 million in investments, with 1.33 million people attending the Fair in 2019. The 2021 Fair runs from August 20 to September 6.