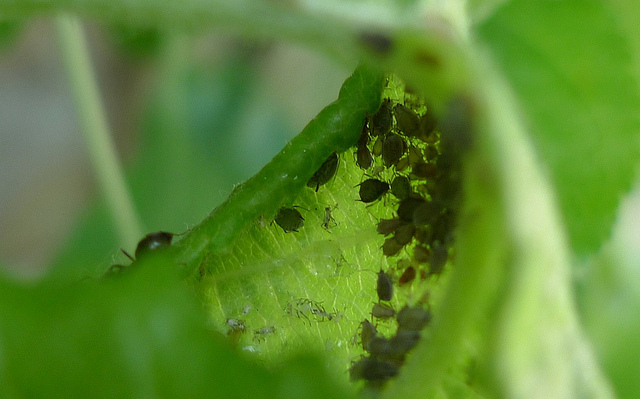 LEXINGTON, Ky. — Kentucky and the northeastern U.S. experienced a mild winter in 2017. To survive the low temperatures of winter, insects enter into diapause at a specific life stage (adult, larva, pupa or egg). Diapause is a process in which insects slow their metabolism almost to a stop, or they thicken their body fluids to keep the water in their bodies from forming ice. Water transformed to ice expands in volume; this process can rupture cell membranes, causing cell death and the subsequent death of insects. This physiological adaptation of insects is dependent on the temperature and the shortening of day lengths starting in fall.

However, a mild winter for insects present in wheat fields can create conditions that might be bad in two different ways. First, many insects (pests and natural enemies) can survive the winter; and second, an early high abundance of insects, such aphids, could result. Aphids have a high reproductive rate and short generations that can benefit from the early warmer temperatures experienced in February and March in Kentucky, when temperatures were above 50º F and even reaching 70 º F. In addition, aphids might have been transmitting viruses, like barley yellow dwarf virus, during this time. The latter can reduce crop yields if resistant varieties were not planted.

In contrast, freezing temperatures experienced in Kentucky from March 10 to 17 this year, after periods of warm days, may have affected the survival of many insect species that were already active. In this case, natural enemies of aphids, such as parasitoids, might have been severely affected in comparison to their aphid hosts. Parasitized aphids with wasps developing under warmer temperatures, followed by a sudden frost and thawing, most likely were not “well equipped” (not enough time to enter into diapause), and may have been killed.

The decline of parasitic wasps can affect the natural control of aphids in wheat. For example, in the absence of the parasitic wasp (Aphidius rhopalosiphi) in Belgium, the English cereal aphid population was greater than when the wasp was present (Figure 1).

A precise science for predicting insect populations following a warm winter is not fully developed, but under the conditions described above, wheat producers and consultants need to pay attention and be dedicated to monitoring the presence of aphids in their fields. Insecticide spray should only be completed if the aphid populations are above the established threshold of more than 10 aphids per foot row.