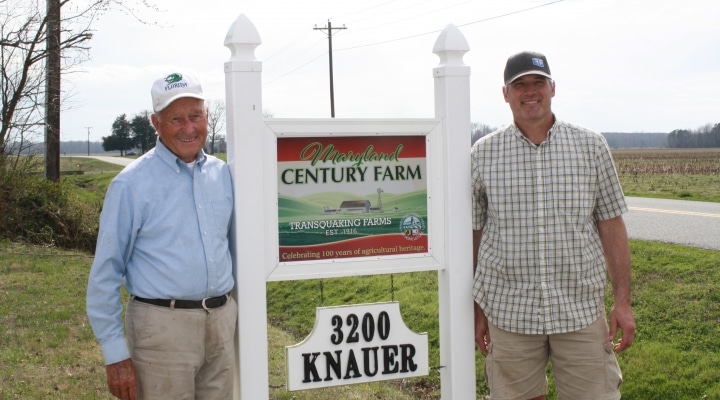 Frank and his son Mike are still farming the same land bringing it to four generations. Mike bought Transquaking Farms, a Maryland Century Farm, from his dad about five years ago. Laughing, Mike said, “Dad still works on the farm, he just gave me all the bills. Dad won’t stay inside on a rainy day, let alone a good day.” (photos provided by University of Maryland Extension Dorchester County)

CAMBRIDGE, Md. — Born during the Great Depression in 1933, Frank Knauer was destined to be a third generation farmer. Frank’s father and grandfather lived in difficult times when approximately 400,000 farms were lost through foreclosure across the nation. In 1933 Congress passed the Farm Credit Act, making loans available to farmers and creating a banking system for farming cooperatives.

“A story that’s come down through my family history is that in 1916, my grandfather must have borrowed a lot of money from the bank,” Frank said. “The board of directors didn’t want to let him have that much money. So the rumor went around that the board said, ‘let the old guy have it, we’ll get the farm back next year.’ But what they didn’t know was that my grandfather had four sons to help him on the farm. My grandfather made it, and the bank didn’t get the farm.”

Today, Frank and his son Mike are still farming the same land bringing it to four generations. Mike bought Transquaking Farms, a Maryland Century Farm, from his dad about five years ago. Laughing, Mike said, “Dad still works on the farm, he just gave me all the bills. Dad won’t stay inside on a rainy day, let alone a good day.” 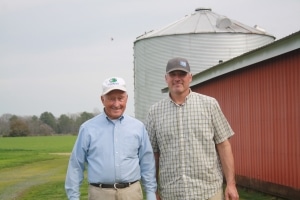 In high school, Mike knew he wanted to work with his hands, so he studied diesel mechanics at the Vo-Tech Center. “That education paid off, we’ve never needed a diesel mechanic on the farm with Mike around,” said Frank, who was a previous board member and past vice president of the Dorchester County Farm Bureau and one of the last two active charter members of the Dorchester Ruritan Club, with over 50 years of service.

However, Mike’s career started off quite different from his dad’s. Mike worked as a mechanic for several local companies including Wheatley Trucking. During that time, he decided to look for work with NASCAR crews in North Carolina. In 1995, his first job was with Dave Marcis Race Team near Asheville. Then in 2001 he found a spot with the Hendrick Motorsports Racing Team in Concord, NC. Mike was a member of NASCAR’s Jimmie Johnson’s pit crew, handling the Catch Can, collecting overflow fuel, and also the front suspension of Johnson’s 48 car. 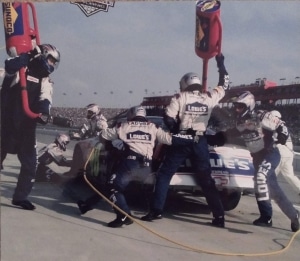 “When I told dad about this opportunity in 2001; he said, ‘Son, if it’s a dream, you need to chase it while you’re young,’” Mike said. “I’m very grateful for the opportunity I had for 15 years, and I’m thankful that dad allowed me to do it. However, every year at the end of racing, I always did a re-evaluation of what I wanted to do and if this was where I wanted to stay? I knew farming was always an option, so in 2010 when my son started playing t-ball and became interested in other activities, I knew it was time to leave NASCAR and return home with my family to the farm.” “I went from NASCAR to a 1947 Farmall M tractor,” said Mike.

Today, their production is wheat, soybeans and organic corn and Frank has never seen himself doing anything else. “Long ago, when times were tough, you did what you had to. So I worked for Kent Freight Lines three days a week, then had four days to farm,” Frank said. “I always figured out how to make it work and it always did.”

“I can remember one year when I was about 11 years old, the ground was so dry that dad couldn’t even plant beans,” said Mike.” So he took that opportunity to drive a truck for Jerol Moore and left me on the farm to harvest the wheat. It’s pretty crazy to think, I was only 11 years old and operating a combine out in the field.”

“For any person to be self-employed or operate their own business it takes a little different dedication than the person that punches the clock,” Frank said. “I’ve heard people say ‘I wouldn’t have the nerve to work for myself’ because I wouldn’t have the discipline to get up in the morning.’ For me, when I walk out the back door I’m on the job.”

“It also takes self-discipline to learn how to manage your money,” says Frank. “You need to have capital and save enough to carry you till the next year. If you can eliminate that spring loan on seed and fertilizer, you’ve done well. You know… farming is the dumbest occupation there is. You bury your money and hope it grows.”

Frank said, “Over the years, the Dorchester Extension Office was a huge help to me. Cathy Scott used to prepare my Nutrient Management plans, and I know they’re always there for insect questions or anything else I might need.” 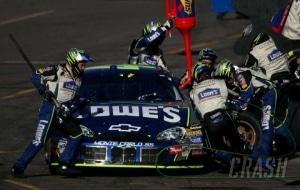 I asked Mike what’s the most valuable lesson he’s learned from his dad over the years? “What I hold most valuable is watching Dad’s work ethic and how he interacts with other people. You don’t have to ask him for help, he’s just there.” Mike said. “Yesterday, I was looking for him and Mom said he’s down to the church picking up sticks. That’s just how he is, always helping someone else.”

When this father/son team has down time, Frank likes to travel and usually goes to Lake Okeechobee in Florida every year. Mike, who is now a member of the Dorchester County Farm Bureau as well, likes to fish and hunt, and just returned from Cabo San Lucia on a fishing trip.