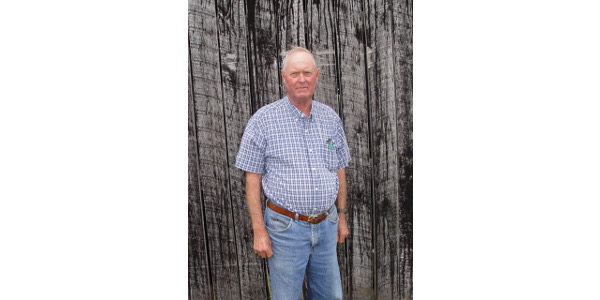 As a result of his success as a row crop and beef cattle farmer, Bach has been selected as the state winner of the Swisher Sweets/Sunbelt Expo Southeastern Farmer of the Year award. (Courtesy of Sunbelt Expo)

MOULTRIE, Ga. — Robert Michael “Mike” Bach has served his country as an officer in the U.S. Army, and as a successful Kentucky farmer.

In the Army, Bach was known for his marksmanship. He retired as a lieutenant colonel. As a farmer, Bach successfully transformed his farm from reliance on burley tobacco to one that now depends on beef, forages, corn and soybeans.

As a result of his success as a row crop and beef cattle farmer, Bach has been selected as the state winner of the Swisher Sweets/Sunbelt Expo Southeastern Farmer of the Year award. He joins nine other individuals as finalists for the overall award that will be announced on Tuesday, Oct. 17 at the Sunbelt Expo farm show in Moultrie, Ga.

At his Slate Creek Farm near Owingsville, Ky., Bach grew some of the first Roundup Ready alfalfa. Last year, Bach grew 30 acres of hemp, a potential new alternative crop he grew for seed. He’s also a successful peach grower with 400 trees on just over an acre of land. In addition, he grows 200 acres of timber and about an acre of asparagus.

As a tobacco farmer, Bach raised 96,000 pounds annually. With the quota gone, Bach moved on to other enterprises. He still grows a few tobacco plants in his garden, just to maintain a history of the crop. “Tobacco was a big part of my heritage,” he says.

Most of his corn grain is sold for cash to a local feed mill. He markets the silage by feeding to his own cattle. He forward contracts most of his soybeans.

Bach sells some corn to whiskey distilleries that want no more than 14% moisture. A new grain dryer helps him serve this market. He also has 60,000 bushels in grain storage that aids in marketing.

He markets steers in trailer load lots by selling to order buyers for backgrounding. He sorts heifers and sells some at the same time as the steers. Top performing heifers are bred and sold by private treaty or through a bred heifer sale. He sells bulls through private treaty and sells cull cows at local stockyards.

He sells his peaches through a Kentucky Proud farmer’s market. He also sells peaches and asparagus on the farm. Much of the asparagus ends up in upscale restaurants.

“I decided to save money on labor by buying and using big equipment,” he adds. “We now use 8- and 16-row planters and 300-hp tractors. He’s building new cattle-working facilities and has built four hoop barns to store hay.

Tobacco settlement money has helped him improve the cattle facilities and genetics of his beef herd. Bach says, “We have a 90-day breeding and calving season. We buy performance-tested bulls, mainly Angus. We have never gotten a bad bull. We have bought some superior bulls. We select bulls for calving ease traits.”

Bach grew up on a 60-acre beef and tobacco farm. As a child, he was paid 10 cents per day to shovel manure from a barn. He was active in FFA and studied animal science at the University of Kentucky.

After graduation, he served five years of active duty in the Army, including a tour in Vietnam, then moved to Louisville, Ky., where he sold farm equipment for five years. He then moved to Owingsville to farm with his father in law. Throughout much of his early farming career, Bach served in the Army Reserve, a duty that required extensive travel throughout the U.S. and the world.

Protecting the environment is important for Bach. He has used rotational grazing, buffer strips along streams and has built ponds. He composts dead animals, uses grassed waterways and has a manure-handling shed. He recycles plastic from his round bale silage. He also uses no-till planting along with crop rotation and cover crops.
He’s planning for the future. He has an estate plan in place to pass on his farm. He’s still buying land. And over time, he’d like to have more owned land and less rented land.

Bach has been active in a number of Bath County organizations. These include the Cattlemen’s Association, Extension Council, County Fair, Extension Foundation and Farm Bureau. He has been a member of a local Southern States advisory committee, Owingsville Lions Club and the Chenault FFA Advisory Board.

On the state level, he served as president of the Kentucky Cattlemen’s Association. He sits on the 4-H Foundation board, served as Extension Council president, and on the University of Kentucky’s Veterinary Diagnostic Laboratory Advisory Board.

He has been on an advisory board for the University of Kentucky Farmhouse Fraternity. He participates in an annual Kentucky Farm Bureau beef tour, and served on a state water quality advisory committee.

Bach serves on a state Farm Bureau forage committee, and is vice chair of the Kentucky Cattlemen’s Foundation. He’s also a member of the University of Kentucky Agriculture Alumni.

His wife Mary retired from teaching and is an accomplished farmer as well. Mike’s farm would not have the success it has without Mary’s work. She planted corn and cared for the cattle when Mike was away. She keeps books for the farm, manages cattle near their home and oversees the farm’s peaches and asparagus.

Their only son Steven is a University of Kentucky agriculture graduate who came back to the farm and helped the transition from tobacco to other crops.

L. Joe Cain with Kentucky Farm Bureau is coordinator of the Farmer of the Year award in the state. Bach was nominated for the honor by Michael Staton, Farm Bureau president in Bath County. Staton and Steven Bach were friends growing up and were University of Kentucky roommates who both came back to Bath County to farm. They’ve become leaders in the community. Staton admires the Bachs for their community leadership and their farm diversification.

George Hieneman, area program director with Kentucky Farm Bureau, has known the Bachs for seven years. “My wife was county Extension agent here. She told me they would welcome me with open arms, and they have,” says Hieneman.

As the Kentucky state winner of the Swisher Sweets/Sunbelt Expo award, Bach will now receive a $2,500 cash award and an expense paid trip to the Sunbelt Expo from Swisher International of Jacksonville, Fla., a $500 gift certificate from the Southern States cooperative and a Columbia vest from Ivey’s Outdoor and Farm Supply.

He is now eligible for the $15,000 cash prize that will go to the overall winner. Other prizes for the overall winner include the use of a Massey Ferguson tractor for a year from Massey Ferguson North America, another $500 gift certificate from Southern States, a Columbia jacket from Ivey’s Outdoor and Farm Supply, a smoker-grill from Hays LTI and a Henry Golden Boy “American Farmer Tribute Edition” rifle from Reinke Irrigation.

Swisher International, through its Swisher Sweets cigar brand, and the Sunbelt Expo are sponsoring the Southeastern Farmer of the Year awards for the 28th consecutive year. Swisher has contributed some $1,080,000 in cash awards and other honors to southeastern farmers since the award was initiated in 1990.

A distinguished panel of judges will visit Bach’s farm, along with the farms of the other nine state finalists, during the week of Aug. 7-11. The judges for this year include farmer Thomas Porter, Jr., of Concord, N.C., who was the overall winner in 2011; and Charles Snipes, retired Mississippi Extension weed specialist from Greenville, Miss.; and beef cattle rancher Cary Lightsey of Lake Wales, Fla., who was the overall winner in 2009.