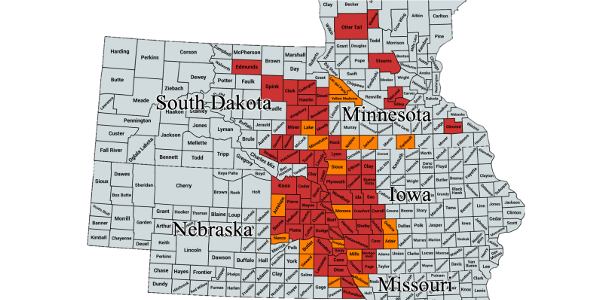 In Nebraska, soybean gall midge emergence in soybean has trickled along at low levels from the past couple weeks until this past Sunday when large populations of soybean gall midge adults were observed at nearly all sites in the east-central part of the state. As of Friday, August 2 a cumulative total of approximately 650 adults had been collected across all sites in east-central Nebraska with no more than 37 adults collected on a single day. On Sunday, a total of 756 adults were collected from eight sites in east-central Nebraska with 261 adults emerging from a single site over a two-day period. No significant numbers of emerging adults have been observed in northeast Nebraska.

With such high numbers of adult emergence in the recent days, many might be wondering if any action is needed. We do not recommend taking any action against soybean gall midge at this point in the season. Emergence of adults has continued since the Sunday collection and we expect emergence to continue through mid- to late-August based on last year’s observations.