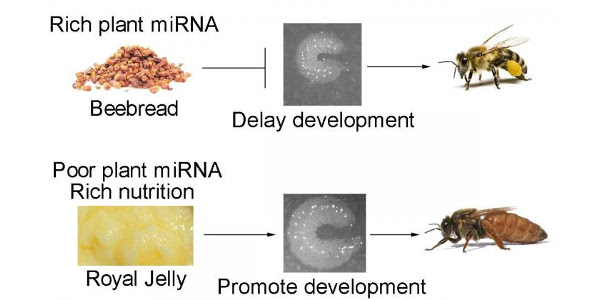 Working model for the cross-kingdom transfer of plant microRNAs in the regulation of honeybee development. (Courtesy of Drs. Xi Chen and Kegan Zhu)

HAMILTON, Ill. — Bee larvae develop into workers, in part, because their diet of pollen and honey, called beebread, is rich in plant regulatory molecules called microRNAs, which delay development and keep their ovaries inactive. Xi Chen of Nanjing University in China and colleagues, report these August 31, 2017 in PLOS Genetics.

Researchers have long known that diet plays an important role in the complex process that determines whether a honeybee larva will become a worker or a queen. While the workers primarily consume beebread, the queens feast on royal jelly secreted by the glands of nurse bees. Beebread contains much higher levels of plant microRNAs than royal jelly, so researchers decided to investigate if these molecules, which regulate gene expression in plants, could also impact honeybee caste development. They found that honeybees raised in the lab on simulated beebread supplemented with plant microRNAs developed more slowly and had a smaller body and smaller ovaries than larvae raised without the supplements. The plant microRNAs also had a similar effect on fruit fly larvae, even though fruit flies are not social insects. Further experiments showed that one of the most common plant microRNAs in beebread targets the TOR gene in honeybees, which helps determine caste.

The study shows that there is more to the story of honeybee caste formation than the traditional focus on royal jelly and identifies a previously unknown function of plant microRNAs in fine-tuning larval development. The work is a powerful example of the effects of cross-kingdom microRNAs and how these interactions can affect a species’ development and evolution.

“Regulation of honeybee development by plant microRNAs shows an evolutionary adaptation for colony success through partnership between two species. Further studies in this new field may shed light on the impact of food processing on the evolution of eusociality” said Dr. Xi Chen.