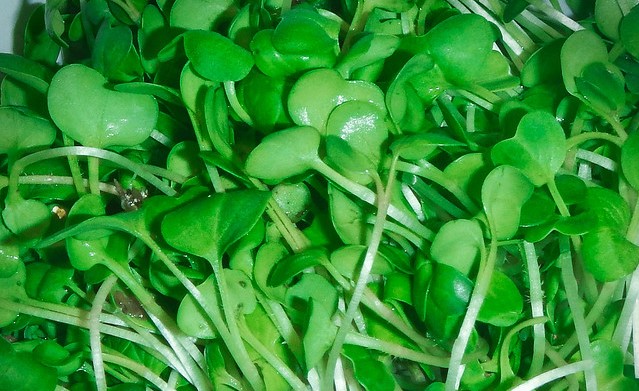 WASHINGTON — If you like munching on seedlings, consider directing your palate toward microgreens. These tiny vegetables burst with rich, leafy flavors ranging from spicy to sweet, and their nutritional power exceeds that of the adult plants.Use them as garnish, sprinkle them onto salads and soups, add them to sandwiches or blend them into smoothies. A handful goes a long way.

“There are more and more health-conscious people who have already learned there are great nutritional advantages to microgreens,” said Dan Fosso, who operates Whidbey Microgreens in Oak Harbor, Washington. Besides, microgreens simply taste good, he said, and are increasingly being plated up by chefs at gourmet restaurants, as well as delis and bistros.

A U.S. Department of Agriculture research team tested 25 commercially available microgreen varieties to evaluate their nutritional content. They reported in the Journal of Agriculture and Food Chemistry in 2012 that they were surprised at results indicating the microgreens contained 4 to 40 times more vitamins and carotenoids than their mature plant counterparts.

Microgreens are the culinary cousins of seed sprouts and baby greens, but differ from both.

“Microgreens are usually slightly larger than sprouts, are grown in soil rather than water for more taste and nutrient quality, and notably are already producing their first growth of tiny leaves that sprouts don’t yet have,” he said.

“Baby greens are allowed to grow longer to gain enough size for entire salads and side dishes, yet still have tender leaves and great flavor,” Fosso said.

Sprouts are the youngest of the seedling family, and the entire plant can be eaten, including shoots and roots, according to horticulturists with North Carolina Cooperative Extension. Popular seeds for sprouting include sunflowers, lentils, peas, mustards and alfalfa.

Baby greens, of which generally only the leaves are eaten, include spinach, lettuces and a variety of colorful herbs.

It usually takes eight to 14 days for seedlings to be table-ready after germination.

Some species, however, grow more quickly than others. Herbs such as parsley, sage, mustard, dill, basil and cilantro can take around three weeks, Fosso said.

“Some extra-delicate microgreens like sorrel take as long as nine weeks,” he said.

Microgreen flavors commonly change with age. Do a string of taste tests at various stages of their growth to determine when you like eating them the best.

Seedlings are perishable once cut, although microgreens can last a week in a refrigerator if stored properly.

“Put them into a refrigerator soon after harvest in a container that maintains humidity and prevents them from getting crushed, such as a clamshell or plastic bag,” North Carolina Cooperative Extension says.

Most microgreens are so delicate they are eaten raw or used as beds for cooked foods, Fosso said.

“They are too fine in texture to hold up their flavors and texture at higher temperatures,” he said.

For more about growing microgreens, see this fact sheet from University of Illinois Extenson: https://web.extension.illinois.edu/dmp/palette/090315.html

Perdue on disaster and trade-related assistance

Need a gardening teacher? UMaine has one for you
August 9, 2020