Subscribe
Home / National / Microbes on the menu for bee larvae 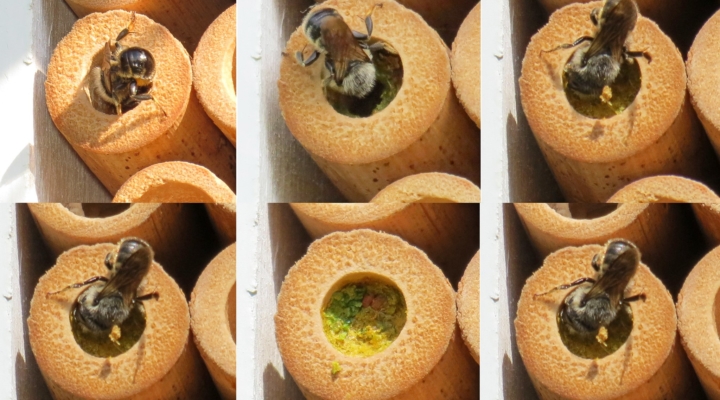 MADISON, Wis. — Bees only feast on nectar and pollen, right?

Reporting online in this month’s American Naturalist, a team of Agricultural Research Service (ARS) and university scientists has shown that bee larvae (brood) have a taste for “microbial meat.”

ARS entomologist Shawn Steffan and his colleagues at the University of Wisconsin, Cornell University, and Hokkaido University in Japan coined the term to describe an important ingredient in the brood’s pollen provisions—namely, the protein of beneficial bacteria and fungi.

The microbes are naturally occurring in the pollen and feed and multiply within it. In the process, they increase the pollen’s nutritional value to brood by enrichening it with amino acids—the building blocks of protein—that flowering plants alone may not always provide.

“Bees actually require the non-plant proteins of these pollen-borne symbionts to complete their growth and development—which makes them omnivores,” explained Steffan, with the ARS Vegetable Crops Research Unit in Madison, Wisconsin.

In fact, the team observed an appetite for microbial meat among brood that spanned 14 species distributed across all major families of social and solitary bees—Melittidae, Apidae and Megachilidae among them.

The microbes don’t just serve themselves up as critical sources of amino acids, though. They also secrete enzymes that help break down and age raw pollen into a more nutritious and digestible form known as “beebread.” Nurse bees may recognize this benefit and encourage the microbes’ growth in pollen fed to brood, note the researchers in their paper. This microbial mix-mash may also check the growth of harmful bacteria or fungi that can ruin beebread or sicken the hive.

For their study, the researchers used isotope- and gas chromatography-based methods to calculate the ratio of nitrogen in two types of amino acids (glutamic acid and phenylalanine) in the tissues of adult bees and in beebread. The team chose the method because of its accuracy in determining an organism’s trophic position—where it stands on the proverbial food web of life based on the flow of nutrients and energy from producers to consumers of these resources.

In this case, the team’s isotope analysis showed that bee brood’s consumption of both plant and microbial proteins warranted raising the insect’s trophic status from that of a strict herbivore to an omnivore.

More broadly, Steffan said, the findings underscore the need to examine what effects fungicide use on flowering crops can have on the microbial make up of pollen fed to brood and, in turn, their development.