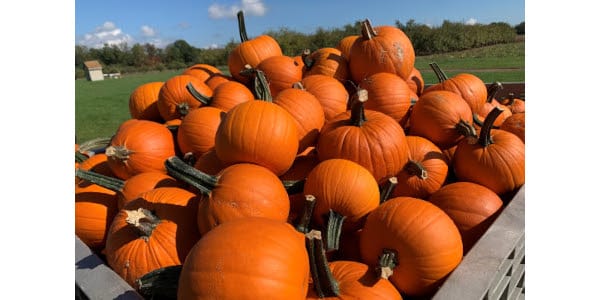 According to the National Retail Federation, 44% of Americans say they plan to carve a pumpkin as part of their Halloween celebrations. (Michigan Farm Bureau photo)

LANSING — A billion pounds of pumpkins. It certainly sounds like a lot, but would you believe that kind of production comes from just six states?

While Illinois is the undisputed king of pumpkins, harvesting twice as many acres as any other state, Michigan also charts among the top — ranking fifth overall.

Michigan pumpkins generate almost $10 million from the 79 million pounds produced, with a majority going for fresh market use, according to the Michigan Ag Council. Oceana and Monroe counties are the top two producing areas in the state, but pumpkins are grown across Michigan, with famers growing up to 20,000 pounds of pumpkins per acre.

“With fall here and Halloween right around the corner now is the perfect time to go out and find your Michigan pumpkins,” said Theresa Sisung, Michigan Farm Bureau industry relations specialist. “While supplies may be tight in some areas of the state due to lots of rainfall, there are plenty of pumpkins grown all across Michigan.”

There’s a massive market for Pumpkins. According to the National Retail Federation, 44% of Americans say they plan to carve a pumpkin as part of their Halloween celebrations.

To help people get in the Halloween spirit, the Michigan Ag Council is holding the #MIPumpkin social media contest — with a $500 Kroger gift card going to the winner.

To participate, simply take a picture of your Michigan pumpkin after you decorate it, then use the hashtag #MIPumpkin and tag Michigan GROWN, Michigan GREAT on Facebook, Instagram or Twitter.

Only Michigan residents are eligible to win, and your photo must be posted by Oct. 31, 2021. Click here to learn more.