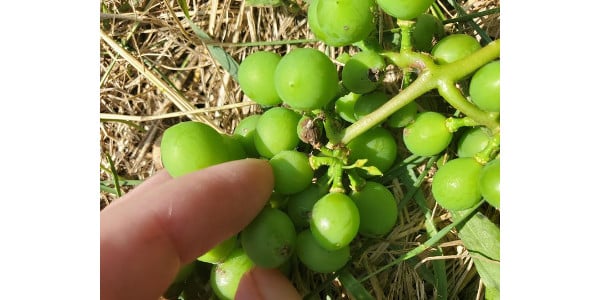 Grape berry moth damage is continuing to be seen. The next round of egglaying should begin in the next week in southwestern Michigan. Berries on early blooming varieties are now large enough for berry moth to start getting inside the fruit. (Photo by Jacquelyn Perkins, MSU Entomology)

Much of the state saw high temperatures in the 80s this past week. A storm system passed through the southern half of Michigan on Friday and Saturday, bringing high winds and heavy rain. Those that saw rain had anywhere from 0.5 to 1.5 inches. The warm weather should continue with mid- to upper 80s predicted for at least the next seven days. Rain chances will be low for the region.

With the warm conditions, we picked up a good amount of growing degree days (GDD) last week: 120-140 GDD base 50. The southwest region is 310 GDD base 50 ahead of the northwest region.

Early hybrid varieties and juice grapes in southern Michigan are at buckshot berry. Vinifera grapes have finished bloom. Some growers have begun early leaf removal on some vinifera varieties. This will allow any sprays to reach the clusters easier and to improve sunlight penetration to the clusters. Juice grape growers have started combing vines to position the shoots to grow out and down from the cordon. Hybrids and juice grapes are already passed fruit set. This is the time to accurately estimate vine yield to determine whether, when and how much fruit they should remove at thinning time, in a month or so. Predicting Harvest Yield in Juice and Wine Grape Vineyards (E3186) provides tools to reduce both annual yield and quality variability among years.

In northern vineyards, most vinifera are still in bloom. See this chart for grape growth stages.

The hot, dry weather the last several weeks has dried many soils around the state. The southwest and southeast portions of the state are the most impacted at this point. Any growers that have irrigation setup on their vineyards should inspect their systems to be ready in case they start seeing water stress. With the hot, dry weather continuing for at least the next week, irrigation might be necessary soon, especially on young vines and vineyards on lighter soils. Symptoms of will follow a general progression. During water stress, tendrils will first start to desiccate, followed by shoot tips flopping downward and leaves bending. Under severe water stress, shoots stop, tendrils will dry up and shoot basal leaves will turn yellow.

Growers in the northern parts of the state with vinifera still at bloom should choose fungicides that control downy mildew, phomopsis, powdery mildew and black rot. These diseases all infect new green tissue as it is exposed. Protecting clusters from downy mildew and powdery mildew is critical at this time. Rains are not expected, but warm and humid weather can still be infection events. Phomopsis and black rot foliar infections are still issues in vineyards and have been seen by several scouts around the state. The first few fungicide applications until three weeks post-bloom are the most important.

Downy mildew has been seen on leaves and infesting clusters in several regions of the state. Downy mildew can cause fruit infection and late season defoliation. During buckshot berry, downy mildew infections that occurred in previous weeks may become evident, particularly if there is adequate moisture. Fungicides applied more than one week post-bloom will help protect against defoliation but have limited control over fruit infections.

While the MSU grape team hasn’t spotted powdery mildew yet this year, in warm, humid weather, powdery mildew is a major concern. Infection can occur at temperatures from 59 to 90 F, but 68 to 77 F are optimal. Unlike the other fungal diseases listed above, powdery mildew doesn’t need leaf wetness to infect, just humid conditions. Even if the ambient humidity is low, in the shaded canopy it is likely higher. Opening up the grape canopy to air movement helps reduce powdery mildew while also allowing better spray penetration. Shoot positioning and cluster zone leaf removal can help once bloom has finished.

To reduce the development of resistance with systemic fungicides:

For more information on both these powdery and downy mildew, see “Protecting young clusters from powdery and downy mildew.” For an overview on the general diseases and management options, see early season vineyard disease management and the importance of bloom applications. A complete list of fungicides for all these diseases with efficacy and other details can be found in the E154 Michigan Fruit Management Guide from Michigan State University Extension. Check the guide for potential phytotoxicity of certain sprays on Concord grapes especially (this has been particularly noted for fungicides like Revus Top). Phytotoxicity risk is higher with high temperatures and quickly growing vines.

Note: Thoroughly scout before assuming insects are an economic problem.

Grape berry moth populations are looking high this year. Several vineyards scouted in southwest Michigan have had significant numbers of larvae feeding in the clusters during the first generation, some with multiple larvae per cluster. Moth catches have gone down in the last week, indicating that the first generation flight is ending. We expect the second generation egglaying to start within the coming week in Berrien and Van Buren counties. For those that did not put on a post-bloom insecticide spray for berry moth, next week will be the start of this year’s berry moth control program.

Spray after the July 4 weekend to protect against the second generation of grape berry moth.

Wild grape bloom is used as biofix for the grape berry moth model predicting timing for insecticide sprays. This biofix is recorded as 50% of the clusters on wild grape are at 50% bloom. For 2020, approximate wild grape bloom dates are June 2 in Berrien County, June 4 in Van Buren County, June 5 in Allegan County, June 11 in Ottawa County and June 12 in Grand Traverse County. The date can be entered into the grape berry moth model in Enviroweather to predict when egglaying will start for the second generation of berry moth. Using the approximate bloom dates above, the start of egg laying are July 4 in Berrien County and July 6 in Van Buren County. This highlights the timing when growers should be starting to think about protecting clusters from the second generation of this pest.

Once egglaying has begun, there are a number of insecticides that can be used to prevent grape berry moth infestation, but their timing is critical to give the best performance. Insecticides that affect eggs should be applied at the beginning of egglaying at 810 GDD47 after wild grape bloom. The most commonly used examples are Intrepid and Altacor. Insecticides that are best used against berry moth larvae should be applied when eggs start hatching. This is 100 GDD47 after the start of egglaying (910 GDD47). At this time of year, this is approximately five days after the start of egglaying.

There are a number of chemical options that target larvae. For vineyards that saw significant damage last year or already have seen damage this year from grape berry moth, a second spray targeting larvae should be applied two weeks after your upcoming spray. For more detailed information to help with choosing the right insecticide, see “Mid-season management of grape berry moth.”

Since grape berry moth attacks clusters, coverage is critical for good control. Be sure to use enough water to penetrate the canopy and cover the clusters. A spreader/sticker can also help cover the confined spaces inside the canopy.

Rose chafer and potato leafhopper have both been reported throughout the state. Rose chafers can be found feeding on leaves and young clusters. Potato leafhoppers feed on leaves. Some sensitive grape varieties can get yellowed and cupped leaves, and stunted growth in young vines. Most mature vines are very tolerant of their damage and control isn’t often warranted.

Japanese beetles have been seen feeding on grape leaves throughout the state. They cause a lace-like skeleton on heavily damaged leaves. Since they usually do not feed directly on clusters, they are generally only considered a pest of new vineyards where vines are more sensitive to leaf feeding.

Treatment recommendations for these insects can be found in the MSU Fruit Management Guide (154).

Our grower meetings have moved online. We are using Zoom for our meetings. Here is more information on Zoom.

What to do with unsolicited seed packages
August 3, 2020