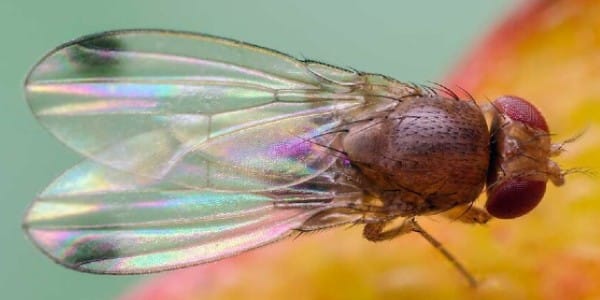 SWD is native to East Asia and was first detected in Michigan in the fall of 2010, two years after it first showedup on the west coast of the U.S. It has since been confirmed in all counties being monitored in the lower peninsula. (Photo by Oregon Department of Agriculture)

APHIS is considering granting permits for the release of G. brasiliensis, a type of wasp that acts as a parasite to SWD, as a means of biological control of the invasive insect.

“This tool is crucial for the survival of Michigan’s berry and cherry growers and their industries,” wrote Audrey Sebolt, Michigan Farm Bureau horticulture specialist, in her comments to APHIS recommending permits be issued.

SWD is native to East Asia and was first detected in Michigan in the fall of 2010, two years after it first showed up on the west coast of the U.S. It has since been confirmed in all counties being monitored in the lower peninsula.

Management of SWD has been identified as a critical issue for Michigan fruit crops, with growers needing to spray several times to control the invasive insect.

Researchers at Michigan State University are currently monitoring the background levels of parasitic wasps affecting SWD and will then be able to compare to what happens if G. brasiliensis is approved.

MSU entomologist Dr. Rufus Isaacs is looking forward to the chance to test how this wasp performs in Michigan.

“The MSU tree fruit and small fruit entomology programs are finding low levels of parasite activity on SWD in the current sampling across Michigan, so we hope to document greater impact from this new species if it is approved,” Issacs said.

The risk from SWD has been so extreme that some Michigan fruit growers have faced higher production costs than the value of their crops.

In 2019, an estimated 30% of Michigan’s tart cherries in the northwest region of the state were destroyed due to a zero-tolerance policy for detectable SWD larvae.

In an update published last month, APHIS stated: “Based on the environmental assessment (EA) and other relevant data, the agency has reached a preliminary determination that the release of this control agent within the continental United States will not have a significant impact on the environment.”

A final decision is pending review of public comments.