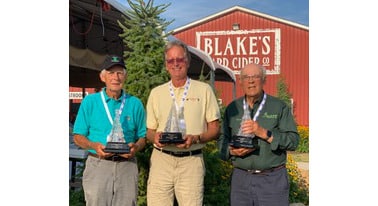 For more than 35 years, Mike Gwinn and his wife Linda have owned and operated Gwinn’s Christmas Tree Farm in Horton, Michigan. They bought their farm in 1987 and started off by planting 7000 Scotch Pine. It was a dry year, and they lost half of what was planted. So, the next year they hand planted the 3500 they lost plus planted 9,000 more. Then came the drought of 1988, and at the end of that summer they had only 400 left out of the 16000 planted! Mike says that he found out early on how tough this business can be. So, he joined the Michigan Christmas Tree Association the following year and started over again. During this time, both he and Linda worked to build up their choose-and-cut business along with wholesaling a few trees, while working full-time jobs off the farm.

In 1996, the factory that had been in Jackson since 1925, and where Mike was working closed down. At 41yrs old he went into the tree business full-time. Mike started leasing land locally and went from planting 8000 trees a year to 30,000 trees. Mike had trees in Allegan, Pentwater, Custer, and Mt. Pleasant. His farthest field was 250 miles from his house. It was during this time that Mike started to meet growers that were in the Christmas tree association from all around our state and they were a huge help. They gave advice, helped purchases trees, and even loaned some of their help when he got behind. This business is a true brotherhood and Mike will never forget the help he received along the way.

For many years, Mike has served on the MCTA Board, including several years as president. Mike believes in the benefits of research. He has allowed his farm to be a research destination for many of the Michigan State University trials of various kinds, based on his proximity to campus and his willingness to allow his trees to be used experimentally.

Mike’s commitment and service is tremendously appreciated by the Michigan Christmas Tree Association. Sharing in the celebration was his wife Linda, his mother, and several family members.

In 1985, Ed Carpenter bought a 180-acre farm in Laingsburg, Michigan.  He grew up on a farm in Three Rivers Michigan and wanted to return to working the land.  Not sure what type of crop to grow he started talking with family and friends.  One friend took his pipe and poked him on the chest with it and told him he was going to teach him the Christmas tree business.  Thus, began the journey of building Peacock Road Family Farm into the agritourism farm it is today.

Ed and Diana Carpenter have grown the farm from selling a few hundred Christmas trees a year to a place where families can come and enjoy themselves in the fall while picking out their pumpkins to getting their Christmas tree during the holidays and jump on the Peacock Express Train to visit Santa at his cabin in the woods.

“The farm is about creating memories and smiles.”  That is what drives the Carpenters to continue to grow their farm.  “We are now seeing second and third generations coming to the farm.  That is how we measure our success”, says Ed.

Ed has been an active member and is a past-president of the Michigan Christmas Tree Association.  He continues to provide leadership to the association by representing yearly at Ag Day at the Capital, spreading the word about real Christmas trees and the impact the industry has on Michigan’s economy. Over the years, Ed has participated in the Trees for Troops program, helping spread joy to military families during the holidays by providing them with real Christmas trees.

Ed’s commitment and service is tremendously appreciated by the Michigan Christmas Tree Association. Sharing in the celebration was his wife Diana, several family members, and many friends.

In 1957, Dr. Jonathan Wright joined the faculty of the Department of Forestry of Michigan State University as a professor of Forest Genetics.  His responsibilities at MSU included teaching and the conduct of research related to tree improvement.  His work at MSU focused on discovering natural variation within a particular species by conducting provenance trials.  This involved collecting seed from individual trees located throughout the range of the species.  These seedlings were then planted in plantations throughout the north central and northeastern United States.  Comparisons in growth rate, form, overall appearance and subsequent planting recommendations were made.  Jonathan had a particular interest in Scotch pine as well as other confer species grown for Christmas trees in Michigan.  These included Concolor fir, Douglas fir, Eastern White pine and Colorado blue spruce.  Many of the present seed source preferences for these species that are produced in Michigan seedling nurseries resulted from his efforts.  As an example, commercially available seed sources of Scotch pine available today include Scotch Highland, East Anglia, French, Belgium and Spanish.  All of these are the results of his work.

In addition to his tree improvement work at MSU, he authored two text books: “Genetics of Forest Tree Improvement” in 1962, and “Introduction to Forest Genetics” in 1976.  He published nearly 100 research papers and was a frequent speaker at forestry tree improvement meetings.

The Michigan Christmas Tree Industry owes much of its success in becoming a leading state in Christmas tree production; Dr. Wright was a major contributor to this recognition and success. Dr. Wright died in October 1986.