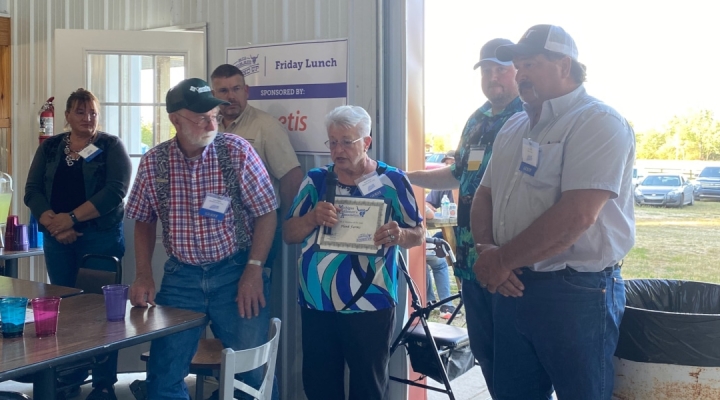 Distinguished individuals and businesses were recognized for their contributions and dedication to the cattle industry during the Michigan Cattlemen’s Association (MCA) Summer Round-Up in McBain. Pictured are representatives of Plank Farms receiving their Member of the Year award at the 2022 Summer Round-Up. (Courtesy Photo)

The tour destination included Dutchman Tree Farm and Cow/ Calf operation in Manton. They are family-owned and operated by Joel and Gale Hoekwater and Chris and Sarah Maciborski. Joel and Sarah’s Grandpa John Vanderweide planted the first tree, a scotch pine, on the farm in 1960. Now this growing farm and family has its 5th generation working on the farm, growing the Christmas spirit with every tree.

Member of the Year

The Michigan Cattlemen’s Association’s “Member of the Year” is Plank Farms.

Plank Farms was established in 1968 and has thrived through the years. Willis and Brian purchased heifers that started the herd while in 4-H. The two began to develop their herd and show cattle. As life took its turns, Brian quit his journeyman job. He added on extra cows and continued to develop the herd which quickly became his full-time job. Brian was the driving force of the farm. As family grew older and drifted their own ways slowly, Brian remained the mainstay. Brian continually developed his herd and contacts in the beef industry. His passion was obvious to those who watched him educate, mentor and mature.

When the MCA/MSU Bull Evaluation Program needed a new home, the family and Brian were able to see the benefits and was confident in Brian’s abilities to manage the program and he did so successfully until his untimely death. The farm is continuing without Brian, and the family continues to be a steadfast supporter of MCA and opportunities for young cattlemen and women.

Agribusiness of the Year

The Michigan Cattlemen’s Association awarded the distinction of “Agribusiness of the Year” to Bill Sheridan and Family at Sheridan Realty & Auction Co. Sheridan Auction Services has been active in the cattle market since 1975 as cattle market owner and purebred cattle auctioneer. Sheridan Auction Services also provides services to the community by offering in-person and online auctions for estate sales, equipment sales, and specialty item sales. Bill and his team have served MCA for many years as auctioneers for the Bull Evaluation Program and Michigan Beef Expo.

Bill’s national and international awards are many including, in 2002, the International Auctioneer Championship awarded to him in Orlando, FL., and Distinguished Service to Agriculture Award from the College of Agriculture and Natural Resources at MSU in 2015. Bill’s involvement and support of the auction industry in the U.S. is long and storied. Bill was elected President of The National Auctioneers Association in 2006, was inducted into the National Auctioneers Hall of Fame in 2014 and inducted into the Charter Class of the Farm Lane Society at Michigan State University in 2016.

Commercial Cattleman of the Year

The Michigan Cattlemen’s Association awarded “Commercial Cattleman of the Year” to Jack Thornton of Meadow Creek Ranch. He farms around 500 acres and does custom work for approximately 600 acres in the area. Twelve years ago, he had the idea that he wanted to farm, and it all started off by renting his grandfather’s property in Reed City. With the help of family and friends he was farming in no time! In 2017, he decided that farming full time as a first-generation farmer was his future. Soon after he brought cattle into the operation, and it seemed like a good fit.

He started out with intensive rotational grazing, adopted some crop residue and inter-seeded cover crop grazing to extend his feed supply. Today, he has about 60 brood cows, 22 heifers, is finishing 65 head of cattle, and is currently planning to expand at a rate of 80% for the next two years. He states “All of this was possible with the help from family, friends, MCA, and friendships made thru the MCA. We now have amazing employees that make everything function as smoothly as possible, or, as smoothly as farming and ranching can go! I’m happy to say that we can now provide my parents with little work, so they don’t get bored during retirement.”

Young Cattlemen of the Year

The Michigan Cattlemen’s Association awarded “Young Cattlemen of the Year” to Cory Peterson of Peterson Farms. The Peterson Farm began in 1893 when their ancestors came from Sweden and settled in Grant Center, Michigan. They originally started as loggers and slowly moved into the lifestyle of farming and began adding milk cows. They milked cows until 2001 when they decided to sell the cows, a decision that really upset Cory. From 2001-2008, his father ran the farm and raised Holstein heifers, had a herd of beef cows, and started fattening Holstein steers. Cory was in college at this point, his dad insisting he get a degree before he could be hired full time on the farm.

In 2009 he took a job with ANR pipeline in the Drilling Department. During this time, he would farm at night and had begun buying beef heifers and breeding them with the goal of keeping the females to continue growing the herd. By his dad had made him a 50/50 partner. In April of 2017 he left his job at ANR and started farming full time.

Today, he is happily married with four beautiful kids and just began the succession plan with his parents for the farm. The farm primarily raises beef steers from 400 pounds to 1,500 pounds. They have about 500-550 head on sight at all times, coupled with 50-60 bred cows. They also sell freezer beef and seed corn as a bit of a niche business. In 2019, he was approached by Seth Lattimore and Kevin Gould to become a MCA board member. As a board member, he has had numerous opportunities to meet influential and intelligent individuals in the cattle business, and to help guide other local farmers in getting their own cattle farm up and running, all while building relationships within the farming industry.