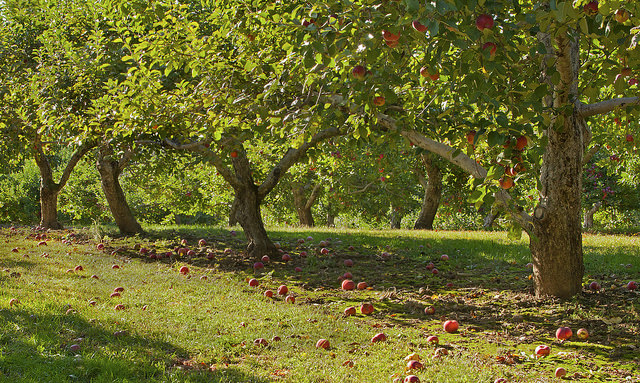 Michigan's official crop estimate of 18.25 million bushels (766.5 million pounds) of apples was announced Friday as part of the USApple Outlook meeting which was held in Chicago. (liz west on Flickr)

LANSING — Michigan’s official crop estimate of 18.25 million bushels (766.5 million pounds) of apples was announced Friday as part of the USApple Outlook meeting which was held in Chicago. The 2021 estimate is below average for the Michigan Apple industry.

“In late April, a freeze occurred in which some Michigan Apple growing areas experienced nine or more hours in the 20 degrees Fahrenheit range, which was too cold for any of the delicate apple blossoms that had opened at that time,” said Diane Smith, executive director of the Michigan Apple Committee. “Even with frost protection tools and the apple trees’ natural defense mechanisms, some of the fruit was lost. However, there will still be plenty of apples for consumers to enjoy this fall.”

According to the USDA, Michigan harvested 22 million bushels of apples in 2020. There are more than 14.9 million apple trees in commercial production, covering 34,500 acres on 775 family-run farms in Michigan.

“Many factors contribute to the size of an apple crop, including weather and the size of the previous year’s crop. To make the estimate, growers and other industry experts report on what they are seeing in various regions of the state, then come to a consensus on the crop size estimate,” said Smith.

While the 2021 crop is smaller, the fruit on the trees is looking good, according to Smith. In addition, a smaller crop this year could mean a larger one for 2022.

“When apple trees produce a smaller crop, energy is stored and directed toward production for the next crop,” said Smith. “The industry is hopeful we’ll see a larger crop next year. In the meantime, growers are proud of the crop they produced this year, thanks to their hard work, a few sleepless nights and crop protection tools in which they have invested.”