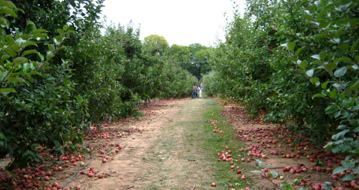 LANSING, Mich. — The Michigan Apple Committee Board of Directors welcomed new appointees and elected officers at their meeting last week. Michael Dietrich of Conklin was elected Chair, and Kimberly Kropf of Lowell was elected vice chair at the meeting. Additionally two newly appointed board members attended the meeting, Christopher J. Alpers of Lake Leelanau and Philip Schwallier of Sparta.

The election of officers comes as Chair Mark Youngquist ended his nine year, three-term service on the board, having served as Chair since 2019.

“Serving on the board of directors signifies a strong commitment to the industry, and to fellow growers. Mark Youngquist has been an exemplary board chair, and we appreciate his service, as well as that of Bob Gregory whose term has also ended,” said Diane Smith, executive director of the Michigan Apple Committee. “MAC welcomes Chris Alpers and Phil Schwallier as new appointees as well. In addition our board has elected two dedicated and knowledgeable members to leadership roles, providing direction as we continue to work toward continued success of the Michigan Apple industry.”

Dietrich, who previously served as vice chair of the board, is a partner with Leo Dietrich & Sons LLC, a sixth-generation family farm with 400 acres of apples, 70 acres of cherries as well as a fresh cherry and apple-packing line. He represents District 2 growers. Kropf is co-owner of Hart Farm LLC, and also represents District 2.

Christopher J. Alpers, of Lake Leelanau, is the vice president of operations for Redpath Orchards. He holds a Bachelor of Arts in Communications from Northern Michigan University. Alpers is appointed to represent District 4 growers for a term commencing May 5, 2021 and expiring April 1, 2024. He succeeds Robert Gregory whose term expired April 1, 2021.

Philip Schwallier, of Sparta, is the owner of Schwallier’s Country Basket and a recently retired district horticulture and marketing agent at Michigan State University. He holds a Bachelor of Science and Master of Science from Michigan State University. Schwallier is appointed to represent District 2 growers for a term commencing May 5, 2021 and expiring April 1, 2024. He succeeds Mark Youngquist whose term expired April 1, 2021.

The Michigan Apple Committee is made up of seven Michigan Apple growers appointed by the Governor of Michigan to represent growers in four different areas of the state. Terms are three years.

The Michigan Apple Committee is a grower-funded nonprofit organization devoted to marketing, education and research activities to distinguish the Michigan apple and encourage its consumption in Michigan and around the world. For more information, visit www.MichiganApples.com.