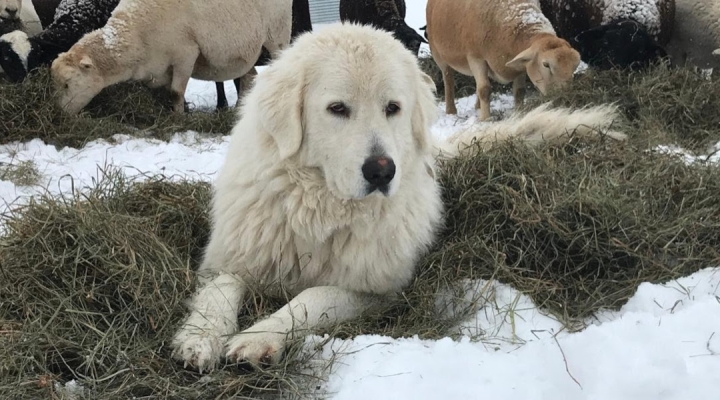 MARLBOROUGH, Mass. — Guard dogs provide Massachusetts farmers with companionship and protect livestock from predator attacks. Bear Paw, who is a maremma, alongside Mr. Magoo and Moose, two other maremmas, protect 10 species of livestock on 77 acres in New Braintree. Since owner Rhonda Howe adopted these three guard dogs, the farm’s predator attacks have dropped to zero. This dedication and his handsome demeanor, lead Bear Paw to be named Massachusetts Farm Bureau Federation’s (MFBF’s) farm dog of the year.

“Guard dogs, like Bear Paw, help farmers by reducing losses to predators as well as reducing their labor by lessening the need for night corralling,” said MFBF Promotion and Education Chair Meg Gennings. “They allow for efficient use of pastures and possible expansion of herds because of decreased labor and space requirements. They are truly working dogs, which benefit their farmers. For these reasons, Bear Paw is an excellent winner for this year’s farm dog of the year contest.”

The contest was sponsored by The Pet Food Institute, and the winners will receive a gift basket of pet-themed items. Thanks to their generosity, in addition to farm dog of the year, three other pups were selected to win awards in the following areas and receive gift baskets:

·       Hardest Worker: Lassie, who is owned by Rena Grover from Bernardston

·       Best Buddy: Ian, who is owned by Marjorie Proulx from Haverhill

·       Best Napper: Gus, who is owned by Valerie Fasano from Spencer

Judging was conducted on MFBF’s Facebook page in late December to name the 2022 Farm Dog of the Year. Entries included written responses and photos to showcase their dog’s dedication to farm life.

Congratulations to this year’s winners!

To view more photos from this contest, please visit our Facebook page.