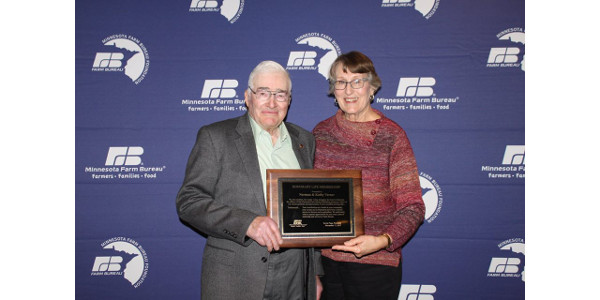 ST. PAUL, Minn. — Recognizing people who have given of their time and talents to agriculture was the focus of the Minnesota Farm Bureau Federation (MFBF) Awards Banquet held Friday, November 17, during the 99th Annual Meeting at the Doubletree Hotel in Bloomington. The awards banquet included both individual and county honors in a variety of categories.

The Distinguished Service to Agriculture award is presented annually to outstanding leaders of agriculture in the state of Minnesota. The award is one of the most prestigious awards given by the Minnesota Farm Bureau Federation. This year’s award recipients were Mike Hergert with the Red River Farm Network; Senator Rod Skoe; and Dick Boniface and Juanita Reed Boniface.

Honorary Life awards are bestowed onto lifelong members who have given enormous amounts of their time and talents to Farm Bureau. Minnesota Farm Bureau is truly grateful for all the dedication that its members give to our organization. This year’s Honorary Life award recipients were Glenn Krog of Lake Benton in Lincoln County; Ralph and Betty Johannes from Cold Spring in Stearns County; and Norman and Kathy Varner from Buffalo in Wright County.

The Minnesota Farm Bureau Foundation presented awards in the following areas:
The Ag Communicator of the Year award is presented to an outstanding leader in the field of communications. This year the award was presented to Jim Bartels of KNUJ in Brown County.

The FFA Advisor of the Year award is presented to an FFA Advisor who has exemplified outstanding service to educating youth about agriculture. This year the award was presented to Seena Glessing who teaches at Howard Lake-Waverly-Winsted in Wright County.

The Post-Secondary Agricultural Educator of the Year award recognizes educators supporting production agriculture. This year the award was presented to Bruce White of South Central College in Mankato.

Four $500 Al Christopherson Scholarships were presented from the Minnesota Farm Bureau Foundation. Recipients are college juniors or seniors or in their final year of college. This year’s recipients are Tyler McAllister of Cass County son of Even and Teri McAllister, Kaylan Risacher from Carlton County daughter of Steve and Kelly Risacher, Abbey Weninger of Wright County daughter of James and Lisa Weninger and Kenny Strobel from Blue Earth County son of Greg Strobel and Robin.

Two $500 Paul Stark Scholarships were presented from the Minnesota Farm Bureau Foundation. Recipients are in their freshman or sophomore year of college. This year’s recipients are Maddie Weninger of Wright County daughter of James and Lisa Weninger and Karla Nelson of Pipestone daughter of Jim and Tami Nelson.

In the county membership group of less than 200 members, the award winner in Public Policy, Public Relations, Leadership Development, Promotion and Education and Membership Activity was Mahnomen County.

In the group with more than 451 members, the award went to Wright County – Public Policy, Promotion & Education and Leadership Development; and Washington/Ramsey – Public Relations.