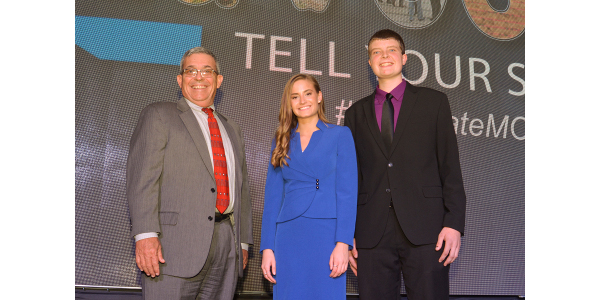 Jacqueline Janorschke of St. Joseph (center) and Charlie Ebbesmeyer of Armstrong (right) are congratulated by MFB President Blake Hurst after being named 2018 MFB Ambassadors at the organization’s annual meeting Dec. 3. (Courtesy of MFB)

JEFFERSON CITY, Mo. — A panel of judges selected Charlie Ebbesmeyer, of Armstrong, and Jacqueline Janorschke, of St. Joseph, as 2018 Missouri Farm Bureau (MFB) Ambassadors during the organization’s 103rd annual meeting Dec. 3 at the Lake of the Ozarks.

The MFB Ambassador Program selects a male and female student 17-to-22 years of age to represent agriculture and Farm Bureau for one year. Each Ambassador receives a $1,250 educational scholarship and travels to Washington, D.C., in March on a Farm Bureau legislative trip. As ambassadors, Ebbesmeyer and Janorschke will make selected appearances throughout 2018 promoting agriculture on behalf of MFB. They will assist with Farm Bureau events at the Missouri State Fair and elsewhere.

Ebbesmeyer represented the Howard County Farm Bureau. His parents are Gerald and Karen Ebbesmeyer. He is a junior at the University of Missouri, Columbia, where he also works as an agronomy research assistant. Ebbesmeyer is involved with the MU Collegiate Farm Bureau and Fayette FFA. He has been a director for CAFNR Week at MU, earned the American FFA degree and been on CAFNR’s dean’s list. He grew up on a family farm raising traditional and non-traditional livestock – cattle and Bobwhite quail.

Janorschke represented the Buchanan County Farm Bureau and is the daughter of John and Michelle Janorschke. She is a sophomore at the University of Missouri, Columbia, where she is majoring in science and agricultural journalism. She is also employed with Tractor Supply Company, and owns a beekeeping enterprise selling honey and beeswax products. Janorschke is active in Collegiate Farm Bureau, Agriculture Future of America and is a Jerry Litton Leaders cohort for 2017- 2018 at MU.

The contest began Sunday morning as judges interviewed each student. During the Sunday evening program, six finalists presented five-minute speeches and extemporaneously responded to a question before judges selected the winners. The Ambassador program is sponsored by the Missouri Farm Bureau Promotion and Education Committee. Scholarship funds come from the Missouri Farm Bureau Foundation for Agriculture. 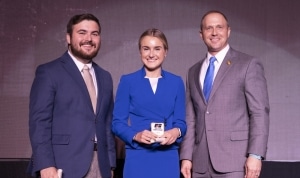 JEFFERSON CITY, Mo. — Four judges selected Jacob Hall, of Marshall, and Jessica Janorschke, of St. Joseph, as 2022 Missouri Farm Bureau (MOFB) Ambassadors during the organization’s 107th annual meeting Dec. 5 at the Lake of the Ozarks. The MOFB Ambassador Program selects a male and female student 17-to-22 years of age to represent agriculture and […]